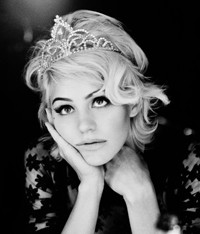 Katharine McPhee warmly laughs as she confesses she’s been in “artistic hiding” for the last few years.

“It took me a long time to figure out where I wanted to go and be as an artist,” she says. “I needed time to learn who I was as a musician.”

Once she discovered the answer, however, her path was sure and swift. On Unbroken, her Verve Records debut, listeners will discover a glorious side of McPhee previously untapped. Poignant, vital lyrics swell over full, lush melodies. McPhee’s supple, clear voice, resonating with emotion and confidence, caresses each note on this collection of soon-to-be pop classics.

Fans first met McPhee on Season Five of American Idol. The runner-up could seemingly sing any style of music, but especially mesmerized millions with her heart-stirring rendition of “Over the Rainbow.” Her first solo album, which debuted at No. 2 on the Billboard Top 200 in early 2007, only hinted at the extent of her talent—not only as a singer but as a songwriter—that Unbroken reveals.

Unlike that first effort, McPhee co-wrote the majority of the songs on Unbroken, collaborating with fellow singer/songwriters Paula Cole, Ingrid Michaelson and Rachael Yamagata. “This record is definitely more personal to me,” McPhee says. “I have more stories to tell. It’s more of an artistic look at me as a person. Coming from a reality show, it’s hard to know the depth of somebody. This record gave me that opportunity to show that. That’s what Verve wanted from me: to make a record I was proud of. It was a huge blessing to give me that.”