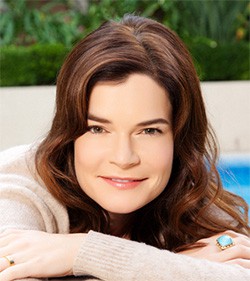 Betsy Brandt is well-known to television audiences for her portrayal of ‘Marie’, the sister-in-law of high school chemistry teacher ‘Walter White’ in AMC’s Emmy award-winning series Breaking Bad, for which the cast also won the 2014 Screen Actors Guild Award for Outstanding Performance by an Ensemble in a Drama Series. Most recently, she starred as Michael J. Fox’s tough, yet loyal wife ‘Annie’ in NBC’s comedy The Michael J. Fox Show. This year, Brandt will star in ABC’s new drama series The Club portraying ‘Leslie Holbrooke’.

On television, Brandt has enjoyed multiple guest appearances on popular shows such as ABC’s Private Practice and Boston Legal; CBS’s CSI and NCIS; and NBC’s hit drama Parenthood. She was also a recurring guest star on CBS’s Without A Trace, and coming this summer she will be recurring on Showtime’s Masters of Sex portraying Barbara, new secretary to Dr. William Masters.

This year, Brandt is set to star in director Jayce Bartok’s feature, Red River, alongside Jason Isaacs and Patricia Arquette. Her feature credits include Steven Soderbergh’s blockbuster film Magic Mike and the independents Jeremy Fink and The Meaning of Life, Memphis Bound...and Gagged, and Shelf Life which Variety called a “whip smart” film that “taps into a fresh source for American comedy”.

Brandt has never lost her love of theater. In the Fall of 2011, she portrayed ‘Holly’ in the West Coast premiere of Geoffrey Nauffts’ Tony-nominated “Next Fall” at the Geffen Playhouse in Los Angeles. She originated the role of ‘Mary’ in award-winner Julia Cho’s “The Language Archive” in its World Premiere at South Coast Repertory. Other credits include leads in the World Premiere of Beth Henley’s “Ridiculous Fraud",  “Much Ado About Nothing” at the Arizona Theatre Company, “Control + Alt + Delete” at the San Jose Repertory, and “Thirst” at the American Conservatory Theater.

Brandt studied theatre with the Moscow Art School at Harvard and the Royal Scottish Academy of Music and Drama. She earned her BFA in Acting at Illinois Urbana-Champaign.

A native of Bay City, Michigan, Brandt now lives in Los Angeles with her husband and two children.