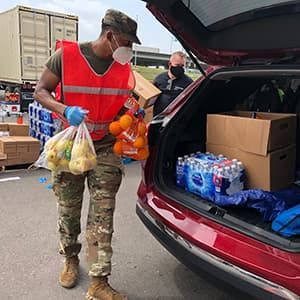 In just over two months, the Gulf Coast and the Southeast have been devastated by four powerful hurricanes.

The most recent storm, Hurricane Zeta, moved across the Southeast on Thursday, October 29, leaving behind a trail of damage. Two million homes and businesse were left without power after destructive winds and rain.

Making a difficult situation even worse, many of the impacted communities were rebuilding from Hurricane Delta earlier this month, Hurricane Sally in September, and Hurricane Laura that made landfall in late August. These storms caused record flooding and led to thousands being evacuated from their homes.

Feeding America is working with food banks in Louisiana, Alabama, Florida, Texas, and Arkansas to mobilize our disaster response to ensure people impacted by all four hurricanes have the food and resources they need.

At this time, food banks in the impacted areas are working to provide necessary food to their communities. As the extent of damage and need becomes clearer, Feeding America and local food banks will continue providing meals and additional resources to support our neighbors in need.

In the wake of all the natural disasters this year, Feeding America continues to work closely with a network of national emergency response organizations such as the FEMA National Response Coordination Center, National Voluntary Organizations Active in Disaster, and the American Red Cross, as well as member food banks and local emergency officials.

I've seen how food banks are making sure students are fed