Healing from Harvey: Stories from Houston 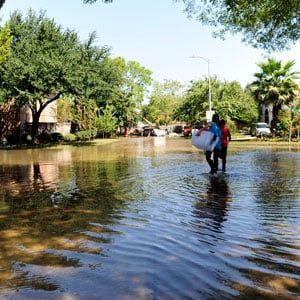 It is hard to prepare yourself to visit a community that has been devastated by disaster. The week after Hurricane Harvey hit, I went to Houston to help Feeding America and its member, Houston Food Bank, with relief efforts. Despite my preparation, I was still shocked by what I saw – the good and bad alike.

Driving through neighborhoods, I saw the entire contents of people’s homes piled curbside. It had all been ruined in the flooding and must be thrown away. I met several people who told me through tears that they had lost everything. Rosalba, a mother who, along with her husband and five children, rode out the storm in two pickup trucks, praying for safety as the water rose. The house she was renting is no longer safe for them to live in. With nowhere to go, Rosalba and her family were now sleeping in those same trucks, parked on the front lawn of what remains of their home. Her landlord said the home would take six to nine months to renovate, so Rosalba was desperately trying to find a place for her family to live.

I met Rosalba at a local food pantry that was distributing disaster supplies and food to hundreds of people. She and her daughter were picking up ready-to-eat meals and toiletries to help them get by. They didn’t know what they would do without the help provided by the food pantry, their gratitude shone through the tears 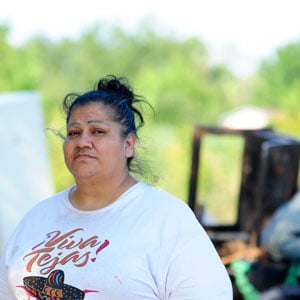 I also met Shirley, a mother of three whose home was destroyed. Her family found shelter from the storm at a local furniture store. Before the storm, Shirley was struggling because of an injury that left her disabled. Now, she has been left with nothing and her house will take six months to rebuild. She’s worried about her kids, but she’s thankful that – because of the food pantry – one thing she doesn’t have to worry about is feeding them.

Amidst the devastation, I was amazed by people’s generosity and the support offered to survivors. The Houston Food Bank was overflowing with volunteers. There were boxes upon boxes of supplies ready to be delivered to local food pantries and meal programs. I was there only five days after the food bank re-opened, and already, more than 5,000 people from all over had been through its doors to volunteer. The community – and country – is truly banding together to help families rebuild.

Even with the outpouring of support, there is still much more to be done. Thousands of families like Rosalba’s and Shirley’s – not only in Texas but in Florida, Puerto Rico and beyond as well – have long roads ahead of them. But I’m hopeful that if we all continue to help in this time of need, everyone will recover, and the wounds that the hurricanes left will be healed.

Learn how you can help support disaster relief efforts>>