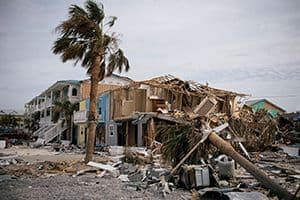 They star in pies, come cinnamon glazed, add crunch to brownies, dot sticky buns and embellish salads. Pecans are a staple of many coveted holiday treats and for many of us, Thanksgiving meals wouldn’t be complete without them.

But this year, because of Hurricane Michael, they might have to be.

The hurricane, which made landfall in the Florida Panhandle on October 10 as a Category 4 storm, caused significant damage to pecan trees and farms in Southern Georgia. Early estimates indicate that 50 percent of the state’s 2018 pecan crop will be lost because of the storm. What was originally a 110 million pound harvest will now be closer to 55 million pounds, reducing availability and increasing pecan costs for consumers.

Natural disasters like hurricanes take an incredible toll on the people, structures, and businesses in their path. Some effects are easier to see: homes destroyed, families displaced, streets flooded. But others – like the loss of the pecan crop – aren’t as evident but are just as damaging. And amid the holidays, another silent consequence of disasters is amplified: hunger.

For people like Lisa, who lives in Panama City, Florida, finding any food for her children after the hurricane has been a struggle – let alone being able to afford food for the holidays.

“Money is normally tight, it’s even tighter now after Hurricane Michael,” she said.

Lisa and her children evacuated before the hurricane hit their apartment, but they still felt the storm’s effects.

“I’ve never seen anything like the damage from this storm before,” Lisa said. “When we came back, we had a lot of water damage to our apartment.”

On a very small budget and without much food after the storm, Lisa turned to a food pantry to feed her family.

“Without the food we’ve been getting at the pantry, my kids would not have had enough to eat after this storm,” she said.

For others, like Missy, the hurricane literally destroyed her ability to work – and cut off her income entirely, right before the holidays.

“The grocery store I worked at was completely gone,” she said. “It was a pile of rubble. I didn’t know what to do.”

In addition to the structural damage to her home, most of Missy’s food was wasted after the storm. Without any other income, Missy – a single mom – needed help.

“It was so hard without food,” she said. “My 4-year-old daughter Adalyn would say, ‘Mommy, I want mac and cheese,’ but I didn’t have it for her. It was rough.”

Right after the storm, Missy heard that a local food pantry was distributing emergency food assistance boxes. At the pantry, she got much more than just a disaster box – she received the food her family needed in a time of crisis – including mac and cheese for Adalyn.

“It’s less stressful knowing where your next meal is coming from,” she said. “This food is helping me feed my daughter.”

After a disaster, “normal” no longer exists. And as Thanksgiving approaches, the need becomes even greater for victims of disasters already struggling to make ends meet. 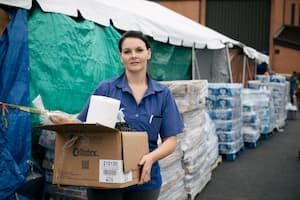 But Feeding America and its network are there to help this Thanksgiving. We were there before the storm made landfall, during the disaster, and we will be there long after the dust settles and the rebuilding begins.

In Florida alone, Feeding America network food banks have distributed the equivalent of more than 575,000 meals and nearly 293,000 pieces of fresh produce. The disaster food distributions will continue through Thanksgiving and beyond, ensuring families impacted by the storm have food – and hope – throughout the holidays.

With Thanksgiving just days away, families and individuals across the United States are still struggling with hunger in the wake of disasters. Please donate to Feeding America so that families dealing with unexpected crises can still share the joy of a meal with their loved ones on Thanksgiving and beyond.

Meet your neighbors who are now facing hunger during the pandemic

Meet your neighbors who are now facing hunger during the pandemic
Millions of people who never thought they'd need food assistance are now turning to food banks because of the COVID-19 pandemic. They're people just like you or me. Meet three of them.