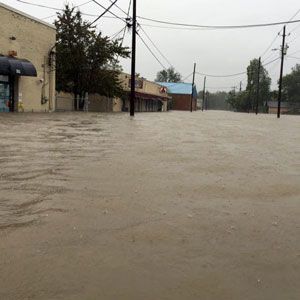 Since the threat of Hurricane Matthew emerged, Feeding America and member food banks in its path prepared to respond. We prepositioned truckloads of disaster-relief boxes in susceptible communities prior to the storm, and prescheduled even more food, water and groceries to be delivered immediately after.

This past week the threat became reality as Hurricane Matthew pummeled the Southeast U.S. It flooded neighborhoods and knocked out power – leaving many in need of food and grocery supplies; some for the first time. Thankfully, Feeding America and its member food banks were in a position to help. As soon as the skies calmed, we got to work. Below is a summary of food banks affected, the damage and how they are preliminarily providing disaster relief and recovery support. As the week progresses, the state of need will become clearer and food banks will adjust their response accordingly.

Florida
Feeding Florida is working closely with the state of Florida on resource needs for all its member food banks. As of Sunday evening, approximately 132,000 homes were without power.

Thankfully, America’s Second Harvest of Coastal Georgia in Savannah sustained no damage. Although it did lose power, it is able to use generators to keep its cold storage facilities operating and prevent massive food loss. Even though most of its staff are still evacuated, they are still working to provide meals for area rescue crews.

Further inland, Second Harvest of South Georgia in Valdosta is providing significant support to shelters housing people displaced by the storm. The area is under evacuation orders for a few days still as officials ensure all bridges are inspected on the coast. To meet the need caused by this, the food bank is delivering 1,000 meals, three times a day to multiple shelters.

South Carolina
Relief efforts in South and North Carolina are Feeding America’s primary concern. In South Carolina, evacuation orders have been lifted in some areas, but in others residents are still advised to stay away.

Charleston was hit hard by the storm, and Lowcountry Food Bank, located in the city, is responding strongly. They are currently assessing the need, but have mobilized water and food distribution to the hardest hit areas immediately – citing tremendous need.

In Columbia, South Carolina, Harvest Hope Food Bank has also been hard at work. It has been providing significant support to 94 shelters housing people displaced. Since the evacuation was ordered late last week, the food bank has distributed more than 70,000 meals.

North Carolina
North Carolina is still reeling from the storm. In much of the state, major neighborhoods are under water and more than 1,000 people had to be rescued statewide. There will be more damage to come too, as rivers are not expected to crest fully until today.

Throughout the state, more than 585,000 people have been left without power and storm damage has left major highways closed in sections. In addition to infrastructure damage, the storm wreaked havoc on farms, causing widespread agricultural losses.

In Fayetteville, Second Harvest Food Bank of Southeast North Carolina (SHFBSNC) lost power, along with 26,000 other city residents. Additionally, the storm caused a water main break and left many people without water. The food bank is struggling to reach out to its community as many staff members are still trapped in their neighborhoods. But with the help of others, including Food Lion and local volunteers, they were able to distribute water to people without on Monday. Feeding America is working with SHFBSNC to understand the full extent of the damage and determine a long-term recovery plan.

In Raleigh, the Food Bank of Central and Eastern North Carolina is focusing on distributing ready-to-eat foods for the thousands of people displaced and unable to access kitchens. Thankfully, the majority of staff only suffered small damages from the storm, so the food bank is prepped to respond.

The same is true of Food Bank of the Albemarle in Elizabeth City, NC. With its facilities intact, the food bank has been busy supplying meals to area shelters. Flooding damaged neighborhoods and cut off highways, so people are still displaced after the storm. It’s currently in the midst of reaching out to partner food pantries and meal programs to determine the increased need.

For information on how you can help us advance Hurricane Matthew recovery efforts, please check back with us later this week. Feeding America is working hard to further assess the need in the storm’s immediate wake.