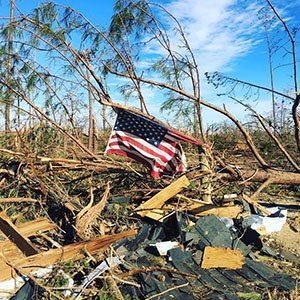 Americans are seeing extreme weather tear through their communities more often, leaving a wake of destruction and the urgent need to rebuild. We’ve already seen it this year, as strong winds, hail, and tornadoes pummeled communities from Texas to South Carolina in early January. Another bout of violent weather also hit the South later in the month, with at least 75 tornadoes tearing across eight southern states over the course of three days.

These devastating weather events pose serious challenges as we try to help our neighbors, whose lives have been turned upside down. That’s where we step in: Feeding America food banks are uniquely equipped to help people get back on their feet following natural disasters. In recent weeks, food banks in the South have been working hard to support families affected by the vicious January storms.

Even before the harsh weather battered the region, many people in South Georgia were struggling. In Albany, one of the hardest-hit areas, 28% of residents struggle with hunger and 70% of children are eligible for nutrition programs, such as free or reduced-price school meals. The damage caused by the storms has only exacerbated the hunger and poverty that have plagued South Georgia for some time.

It will be a long time before the destruction has faded from view, but Second Harvest will remain embedded in the community. In the past week, the food bank has already helped provide approximately 15,500 warm meals to people living in shelters in partnership with the American Red Cross. A number of food pantries and meal programs that receive food from Second Harvest have also been meeting the increased demand for meals. Additionally, the food bank has filled many empty stomachs through its mobile pantry program, delivering meals to people in their neighborhoods so they can focus on removing debris, recovering personal items and repairing their homes.

With support from many generous donors, Feeding America has coordinated the delivery of almost 350,000 pounds of food and groceries to Second Harvest to support its disaster response efforts. National partners including General Mills, Kellogg Company, The Kraft Heinz Company, Mondelēz International, PepsiCo, Perdue Farms and Tyson Foods, Inc. are playing an important role in helping impacted households move on from this tragedy.

While Feeding America can’t prevent natural disasters from happening, we can provide the people they affect with the basic essentials they need so they can focus on putting their lives back together. In fact, local Feeding America food banks are on the ground in every county in America, ready to provide food, water, and supplies to help families in crisis. Thanks to our supporters, we are able to reach people in their times of greatest need.

As COVID cases surge during the holidays, food banks respond to tremendous need

As COVID cases surge during the holidays, food banks respond to tremendous need
The surge in COVID cases means many more of our neighbors are facing hunger this holiday season. Here's how Feeding America and food banks are responding.
Share
Tweet