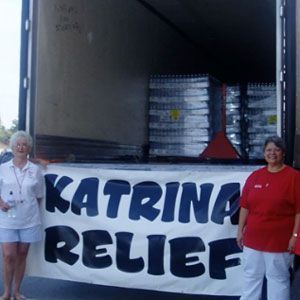 Ten years ago, we achieved the highest level of teamwork that I have ever seen. It was during that time that I was serving as the development director at the Greater Baton Rouge Food Bank. Hurricane Katrina, once a Category 5 hurricane, had stalled on its projected turn to the Florida panhandle and targeted the coastal areas in Mississippi and Louisiana. New Orleans issued its first mandatory evacuation, but delays in evacuating and traffic resulted in many people staying behind. As anticipated, Hurricane Katrina landed and caused a tremendous amount of destruction from high winds and storm surges. What was not anticipated was the crippling volume of storm surge, broken levee systems, and the 20 feet of water that covered 80 percent of the city. It would take over two years to for two-thirds of the residents to return. Still, ten years later, many families and businesses have never returned.

Baton Rouge homes and hotels became temporary host to many families, friends and coworkers. Overnight, the population in the Greater Baton Rouge area more than doubled. The infrastructure and available resources did not. With Katrina, the amount of traffic, power outages, and shortages of gasoline and food made movement and assistance difficult or impossible.

For those of us working at the food bank, it is hard to describe what transpired over the next weeks and months. We came in early and worked late. Weekends became weekdays. Our commutes to work increased by hours. Gasoline stations, groceries, convenience and home improvement stores were either empty or rationing what they had. There was little sleep and virtually no rest. When you could stop to think, it was usually about the family or friends that were displaced or now staying at your homes. The hours of each day were filled with constant highs and lows. Small miracles and large generosities created tiny celebrations. Delays, personal loss and the constant tragic news pulled you back down. Despite all the events, I believe we were successful in stepping up to the challenge.

What made us successful was teamwork, but not the normal variety. Most days, organizations will use the word “teamwork” and still anticipate some limits to collaboration. With an overwhelming task in front of us, we worked together to coordinate food, funds, supplies and access to areas. Uniquely, we did not have to be told to do this. We did not have to be asked. There was no strategic plan for an event like this. Most days were filled with each person doing everything they could possibly do. From our CEO loading trucks with the forklift to our drivers clearing roads to agencies with chainsaws, everyone simply asked how they could help. Then, they did it and moved on without expectation of gratitude or compensation. However, this new level of teamwork was not limited to those at the Greater Baton Rouge Food Bank.

Throughout the Feeding America Network, food banks and the national office immediately sent staff, trucks, equipment, food and funding to the area. It was a level of network engagement never seen before. By the end of the week, employees from across the U.S. had arrived. They worked side-by-side with each other in unfamiliar cities and towns. Many of them slept on the couches and floors of fellow food-bankers’ homes or crowded into tiny hotel rooms. After several weeks, new staff from the Feeding America network would relieve them. Food banks across the nation held additional local fundraisers and food drives to keep assistance flowing. We received daily calls from our fellow food bankers and Feeding America staff to offer support or guidance. Surprisingly, this continued for months even though each food bank still had its own areas of poverty to maintain.

It was this ability and willingness to work together that made it possible to help all of those in need, displaced and suffering from losses. In the fall of 2005, the only thing to hit the U.S. that was larger than Hurricane Katrina was the teamwork and support of the Feeding America network. For all of those that provided support and shared our burden, we are eternally grateful.