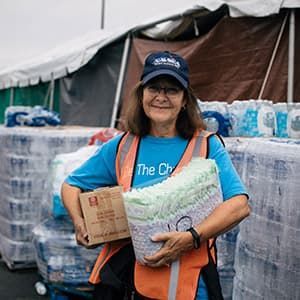 On Sunday, August 29, 2021, Hurricane Ida made landfall about 60 miles south of New Orleans, Louisiana as a Category 4 storm. With sustained winds of up to 150 mph, Ida tied for the fifth-strongest hurricane to ever hit the United States mainland. In addition to the severe winds, the storm brought destructive flooding across Louisiana. In the wake of Ida, nearly one million residents in Louisiana and Mississippi were without power, including a significant portion of the city of New Orleans. Because of the sustained power outages and flooding, access to food and water has been extremely limited.

What are food banks and Feeding America doing?

Food banks in Baton Rogue and New Orleans have been damaged by the hurricane, but remain open and serving their communities. Second Harvest Food Bank has distributed nearly 1.2 million pounds of food and 20,000 hot meals to their community since September 4. Meanwhile, the Greater Baton Rouge Food Bank has provided more than 1.4 million pounds of food to people impacted by the hurricane.

Other food banks across Louisiana, working with Feeding Louisiana - the state's network of food banks - are assessing the needs of their pantries and food programs. They are coordinating mutual aid with Louisiana food banks and those in the Gulf Coast region to deploy resources to support neighbors as they begin to get back on their feet.

Food banks in Florida and Texas have also joined the recovery effort and have provided 11 truckloads of food, water and ready-to-eat meals to food banks in Louisiana.

Meanwhile, Feeding America has deployed 91 truckloads –  about 2.9 million pounds of food, water and other relief supplies, to the impacted communities.

Responding to hurricanes on the Gulf Coast and in the Southeast
In a matter of months, hurricanes have devastated the Gulf Coast, making a challenging time even more difficult for our neighbors in need. Learn more about our disaster response.