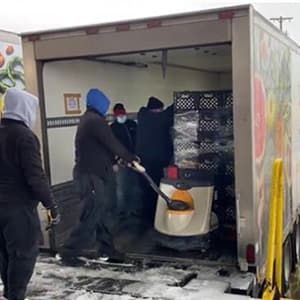 As harsh winter weather blankets much of the United States in ice, snow and cold temperatures, Feeding America and food banks across the country are responding to ensure our neighbors have the food they need.

In the middle of February, a powerful winter storm brought a rare cold snap, freezing rain in some areas and unrelenting snow elsewhere. The weather killed at least 31 people and knocked out power to millions, as outages were reported in Texas, Kentucky, West Virginia, Oregon and Louisiana. Texas was hit particularly hard, as people are continue dealing with power and water outages during what may end up being one of the biggest snowfalls and worst cold snap in the state’s history.

How are Feeding America and food banks responding?

Feeding America is working with national donors to transport food and supplies to the most heavily impacted locations, with a focus on supporting communities in Texas that are dealing with significant power outages and water shortages. Eighty-seven truckloads of food and supplies were allocated across the five hardest-hit states. Of that, half were water and the other half were emergency food. Overall, nearly 3 million pounds of food was allocated to communities impacted by the storm.

Meanwhile, food banks across the South and throughout the country are assessing need and gearing up operations to provide food for their communities that have been impacted by the storm. Food banks are also working with their state and local governments to coordinate response.

While the storms may be over, the impacts will be long-lasting. Many people in affected areas may be seeing higher-than-normal gas bills in the coming weeks and months as they are forced to heat their homes significantly more than usual. Additionally, long-lasting power outages threaten to spoil food and disrupt the supply chain. For families already facing hunger, those added expenses and challenges may make putting food on the table very difficult.

As COVID cases surge during the holidays, food banks respond to tremendous need

As COVID cases surge during the holidays, food banks respond to tremendous need
The surge in COVID cases means many more of our neighbors are facing hunger this holiday season. Here's how Feeding America and food banks are responding.

Responding to hurricanes on the Gulf Coast and in the Southeast
In a matter of months, hurricanes have devastated the Gulf Coast, making a challenging time even more difficult for our neighbors in need. Learn more about our disaster response.
Share
Tweet