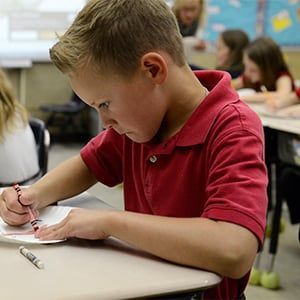 Right on Lake Michigan, Traverse City, Michigan, is a classic resort town. Beautiful homes line the shores and a quaint downtown welcomes millions of visitors annually. But like every community in our country, hunger exists – and it’s often hidden. These Traverse City Area Public School teachers took it upon themselves to help the students at their school who are facing hunger, and who may not have access to help elsewhere. Read their inspiring stories.

Eleven years ago, Mary Preston – a language arts teacher at a Traverse City high school – unintentionally started a food pantry. She had been given a group of students to mentor and thought it’d be a good idea for her mentees to hold a school fundraiser. If students didn’t have money, they were encouraged to bring canned goods that Mary would later donate. Little did she know, she would end up donating them right back to her own students in need.

Mary stored the donated food in her classroom until she could find time to bring it to a food bank. But then kids started showing up in her classroom, asking if she had any extras. “It was then I realized how many hungry kids were in our school,” Mary said. “No one asks for canned green beans if they aren’t hungry. It was a real eye-opener. So we decided to start fundraising for a school pantry.”

In preparation, Mary researched other local pantries. She discovered that most closed at 2 PM before kids could get there, and many kids didn’t even have the transportation to get to a pantry. “I work at an alternative school, and we have a lot of homeless kids that don’t have money for food let alone a car. Having a pantry at school would be a convenient way to get food to kids who really needed it.”

With the support of her principal, community and student volunteers, Mary began stocking her shelves and opened the pantry to any student who wanted to come. “Every day, there are more than 30 kids who come to get food,” Mary said. “We make it easy for them – we don’t make them fill out forms, we don’t ask questions. In this way, it preserves their dignity.”

The students Mary serves have been truly grateful for her help and the generous support of the community. “They thank me all the time, and tell me that without this food, they wouldn’t eat,” Mary said. “And the thing is, if I weren’t running this pantry, I would never have known so many were facing hunger. Among students, hunger is often hidden. It’s important that we recognize this, and do what we can to help.”

Mary Preston’s pantry inspired other local high schools to start food pantries as well. Two years ago, Kim Kramer – a special education teacher at a different Traverse City high school – learned about the school pantry Mary began. At the time, Kim was co-advising her school’s student government group and brought the idea of starting a pantry to them.

“The students really got behind it,” Kim said. “We proposed it to our principal and he did as well. After all, there is a great need here. For most of the past five years, more than 50% of our students participated in free or reduced-cost lunch. This often surprises people, because we live in an affluent community, but hunger here is hidden.”

Soon, Kim and her crew were soliciting and receiving community donations and support. They stocked the pantry with canned and fresh food and toiletries for students to take as needed. The pantry is located near the guidance counselor’s office, and to preserve complete anonymity, the counselor simply gives passes to students who wish to go. To anyone else, it looks like the student is just visiting a guidance counselor.

“I would say there are about 40 students who use the pantry regularly, and more who use it from time to time,” said Kim. “Many of these students don’t have access to other resources in the community so it’s been very helpful to them.”

“But, in addition to students in need, I believe the pantry has really impacted the entire school,” Kim continued. “It’s given students a way to give back and has let everyone know that we care about them and are here for them holistically – beyond just academics. That makes everyone feel good.”

To help students facing hunger in your own community, get in touch with your local food bank.