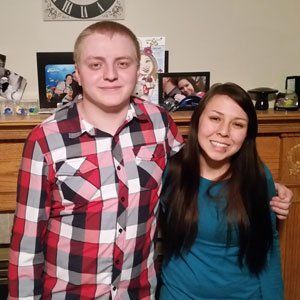 Jordan and Breanna are siblings who have successful careers at Primary Residential Mortgage, Inc. in Salt Lake City, Utah. Jordan, 24, serves as compliance assistant manager and Breanna, 20, works in file review. They both have positive attitudes and promising ambitions. When you first speak with them, they don’t seem too different than other young professionals with the same traits. But when you dig a little deeper, it’s clear how special Jordan and Breanna are, because they’ve achieved their success despite the incredible challenges they’ve had to overcome.

When Jordan and Breanna were children of 8 and 12, they became homeless. Their mother left a troubled marriage and took her children with her. With no income and home, the family bounced from homeless shelter to shelter for a year and a half. The kids often found themselves wondering where they would get their next meal. Jordan, who is four years older than Breanna, better recalls what life was like during this time.

“When we first became homeless, we didn’t really realize what was going on,” explained Jordan. “My mom – even as she struggled with mental stability – sheltered us from the reality of our situation. There came a point however, when I realized that my mom didn’t even know when we’d eat next or where we would stay. And that was terrifying. It was really scary as a child to not know where food was going to come from.”

Jordan said that despite the continuous instability, incredibly, he and his siblings never actually went hungry or skipped meals. He credits this entirely to the community support systems around them that helped ensure they had something to eat. His family lived in different communities throughout their homelessness, and received food from shelters, pantries and meal programs for children – many supported by the local food bank.

“I remember going to a lot of free lunch programs in the park,” Jordan said. “As I get older, I hear public service announcements for these programs that say something like ‘hunger doesn’t stop when school does,’ and it’s so true. We weren’t in school during this time and weren’t receiving meals. Looking back, it’s clear that without these programs we would have gone hungry.”

Jordan and Breanna’s homelessness finally ended when they returned to live with their dad. He made sure they had support and stability through the rest of their childhood years. Jordan and Breanna said they struggled emotionally to deal with what had happened to them, but ultimately they used it as fuel to move forward and strive for better.

“What motivated me most to want to succeed was that everyone seemed to think we couldn’t do it,” remembers Breanna. “I remember specifically sitting in a junior high class and the teacher was explaining what prevents kids from graduating. He said point blank, ‘If you’ve ever been homeless, you won’t graduate high school.’ That made me so upset. I made up my mind right then to prove them wrong.”

Breanna did prove them wrong, as did Jordan. They love their jobs at Primary Residential Mortgage, Inc. and are excited for their futures – but they’ll never forget their past. They remember how much help they received when they were in need, and are dedicated to giving back to families and children who are in need now.

The siblings make a point to participate in food drives, and take special care when picking out items to donate. “I try to donate things I remember eating and liking when we were homeless,” Jordan said. “I remember lots of canned fruits and veggies, pasta and peanut butter. Those are all accessible and really go far.”

They are also very involved in Primary Residential Mortgage, Inc.’s Give A Meal Team Challenge campaign to raise funds to support the mission of Feeding America. They give as much as they can and have shared their story with colleagues to encourage them – and anyone listening – to do the same.

“I hope our story reminds people that there are children out there facing hunger – children who are blameless in their situation,” Jordan said. “We received help when we needed it, and that help changed our lives. Through supporting organizations like Feeding America, we can make sure children in need today have help as well – help that can lead them to a brighter future.”

*Colleen Callahan is a communication manager and content producer at Feeding America.