Giving Up Gifts to Help Kids in Need 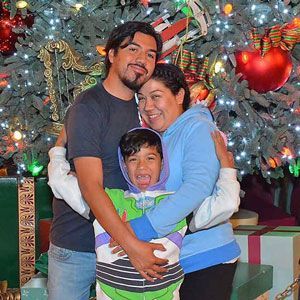 When Alex Ibarra was in kindergarten, he noticed a big truck distributing food outside of his school. He asked his mother, Carina, what was going on. She explained that some of his friends didn’t always have enough to eat, so the truck was there to make sure no one went hungry.

“When I learned that, it made me feel sad,” said Alex, now 7 years old, “and I wanted to do something to help my friends.”

Together, Carina and Alex researched ways he could get involved. “He was still too young to actually volunteer at the food bank,” Carina said, “so we had to figure out something else.”

They came up with the idea of having a fundraiser. At the time, Christmas was approaching, so Alex decided to ask his friends and family to donate to his local food bank – Alameda County Community Food Bank in Oakland, CA – instead of giving him gifts. “I thought that people having food is more important than me having presents,” Alex said, “so I was willing to give them up.” Alex wrote to his family letting them know of his plans, and Carina posted a note about it on social media.

“That first year, we received great responses,” Carina said. “Everyone was really proud of him.”

Encouraged, Alex decided to continue the fundraiser, and when his birthday came around, asked for donations instead of gifts once again. This holiday marks Alex’s fifth food bank fundraiser, and he created a video to help him reach his goal. Over the last two years, Alex has raised about $2,500 for his local food bank.

“He really is an inspiration to us all,” Carina said. “To think that he’s willing to give up presents and things he loves to help others – it blows my mind. It makes me want to do even more too. He’s a special kid.”

Alex simply says that fundraising makes him feel good because he knows he’s helping others and making a difference. “People are hungry and if we don’t stand up and do something nothing is going to change.”

“I think that other kids should run fundraisers too,” Alex continued. “Wherever you live, there’s a food bank by your home where you can donate and help, and that will make you feel good.”

When it comes to his fundraiser’s future, Alex says he has no plans to stop anytime soon. “I want to keep doing this until everyone in the entire world has enough to eat,” he said. “That’s my dream.”

Are you interested in fighting hunger as a family? We have some suggestions to help you get started!