Battling Summer Hunger with the BackPack Program in Southern Nevada 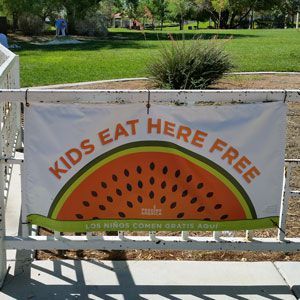 Living in Illinois my entire life, I had no clue what summer in Southern Nevada meant. Triple-digit hot weather for consecutive days? Really? Well, I had the opportunity to check this out for myself on my visit to Three Square Food Bank in Las Vegas, a member food bank of Feeding America.

Every summer when the triple-digit heat starts and the school year ends, thousands of kids are at risk of going hungry in Southern Nevada. Fortunately, organizations like Three Square are always using innovating ways to get more meals to children during the summer months. For summer 2015, they wanted to try something new. Utilizing their Hunger Free Summer Classic grant from the ConAgra Foods Foundation, it implemented a new BackPack program at its open Summer Food Service (SFSP) sites.

Even though I did not get to experience the triple-digit weather (several people said it was unseasonably “cool” being only in the upper 80s/lower 90s), I was still excited to see how the BackPack program was working over the summer months. Upon my arrival, I was courteously hosted by Dorian Stonebarger, program manager, who took me to several summer meal sites, including sites where they distributed BackPacks (a Feeding America program that sends children home with nutritious bags of food) on Fridays for children to take home for the weekend.

Four libraries in the Three Square service area received these BackPacks this summer, including Rainbow Library where two very sweet volunteers hold down the fort and serve SFSP meals outside of the library Monday- Friday in addition to BackPacks on Fridays. The volunteers noticed that the BackPack distribution on Fridays has helped increase the participation of children since they know they will receive more food on Fridays. This follows a common trend we have seen in the network of food banks partnering with libraries to distribute meals during the summer.

Three Square also has a great partnership with Opportunity Village, where volunteers help in organizing the BackPacks that are distributed during the summer. Opportunity Village provides a variety of different programs which provide men and women with all levels of disabilities the chance to lead a life that had previously been unattainable.

Overall, it was a tremendous pleasure to visit Three Square Food Bank and the passionate staff and volunteers that work very hard to help children get access to meals during the hot summer months.

*Juana Montalvo is a program associate at Feeding America.