Reducing Food Waste One Sweet Potato at a Time 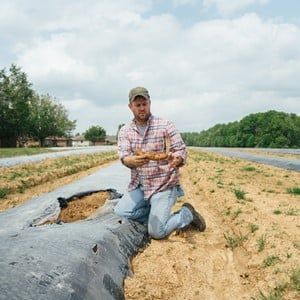 For Matt West, farming runs in the family. Starting with his great-great-grandparents, every generation in his family has farmed small plots of land, so it was only natural he would follow in their footsteps. But Matt was the first to take his farming to a larger scale. Matt runs a 150-acre sweet potato and soybean farm in central Tennessee. His dad wanted him to go to college, but Matt was excited about the challenge of vegetable farming. “It feels like a 13-month-a-year job, but it’s a labor of love,” he said.

Matt is dedicated to farming because he’s passionate about feeding his community. He finds it unacceptable that in a land of such abundance, some people don’t have enough to eat. In Tennessee, where Matt works and lives, 1 in 7 people face hunger. “It could be different,” Matt said. “I know what I grow and how much food I see grown all around me. There should never be anybody hungry in this country.”

That’s why Matt participates in Second Harvest Food Bank of Middle Tennessee’s Farm to Families program. The program has big goals: to recover all excess produce in middle Tennessee and establish lasting partnerships with local farmers and community members. 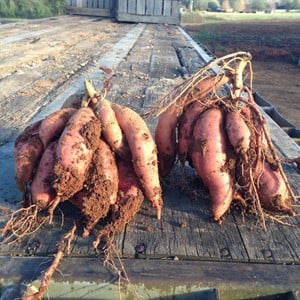 Through the Farm to Families program, fruits and vegetables that local farmers are unable to sell to grocery stores can be sold to Second Harvest. For Matt, this means sweet potatoes that are too small or too big — his largest sweet potatoes reach the size of cantaloupes — or those that have been damaged during the harvesting process in ways that won’t affect the food’s safety.

The program doesn’t stop when the produce reaches the food bank — Second Harvest also holds cooking classes to teach recipients how to prepare the produce they receive. Matt sees this as a crucial step — if people who receive the food don’t know how to prepare it the food will likely go to waste.

With Farm to Families, local farmers can recoup their growing costs on otherwise unsellable crops while knowing the fruits of their labor are filling their neighbors’ plates, not the trash.

Matt is eager to help his neighbors. “It has been a really good relationship with Second Harvest,” he said. “I’ve gotten to know one of the truck drivers [who transports my sweet potatoes to the food bank], and he talks about seeing people lined up, waiting for the next shipment of produce. This program makes a difference.”

Before Farm to Families, produce made up one percent of the food bank’s total offerings. Now, it accounts for more than 25 percent and continues to grow. This year, the food bank aims to bring in nine million pounds of donated produce through the program.

“It’s just a great thing. That’s about all I can say,” Matt said. “If doing something like this doesn’t make you feel good, then I don’t know what to tell you.”

Three stories of rescued food during the Pandemic

Three stories of rescued food during the Pandemic
Food waste is nothing new. During the pandemic, Feeding America worked even harder to rescue food and prevent food waste at grocery stores, restaurants, and farms.

Meet the apple farmer helping hungry families this fall
For Americans who struggle with hunger, enjoying apples - and their amazing health benefits - in the fall isn't always possible. But one farmer in New York who donates excess apples to food pantries is hoping to change that.
Share
Tweet