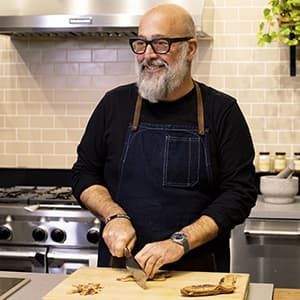 Emmy and four-time James Beard Award winning chef Andrew Zimmern has spent his life exploring the final frontiers of food around the world. He believes promoting cultural acceptance starts with an understanding of the food people eat, why they eat and as importantly, who doesn’t get fed. While the foods he’s eaten around the globe are oftentimes radically different, there’s one constant in the west, especially in America: food is often wasted.

In the United States, 108 billion pounds of food is wasted each year. While much of that waste happens before consumers get the food, we can make a change that starts in our kitchens. Below, Andrew shares his top three easy tips for reducing food waste at home.

It may sound simple, but keeping tabs of what you throw out can be the first step in reducing food waste in your house. Try putting a pad of paper near your garbage and log what food you discard for two weeks, from leftovers to spoiled foods. You’ll start to get a sense for your family’s trends and that’ll help you figure out how you can change your habits. Maybe you’re throwing out a lot of broccoli. Now you know you can buy a little bit less next time you’re at the store. Or, repurpose it into an easy weeknight pasta like this.

I know what you’re thinking. “But Andrew, I need all that space in my fridge!” No, you don’t. I’m not suggesting anyone run out and downsize their refrigerator today, but give this a try. Take one shelf out and remove one drawer. American fridges are too big. We tend to fill up all the space in the refrigerator, and that’s when food gets forgotten about. You probably meant well for those cucumbers you bought two weeks ago and put in the produce drawer…but now it’s a soggy mess. By taking a shelf and a drawer out, it forces you to buy less and you’ll be more aware of what you have in the fridge, which will reduce waste. I bought a European fridge last year, its 1/3 smaller than the massive double door models sold in most American stores and my household food waste almost went to zero.

Shop for a Few Days of Food – Not a Whole Week

Most families plan one big trip to the grocery store every week. Believe me, I get it. We are all busy and many families are stretched to the limits and feel two trips per week is too much. Going to the grocery store can be a big production – especially for families with kids. What if we reframed how we think about that trip to the store – and how we planned our meals? Instead of buying for an entire week, what if we just bought food for three or four days at a time? With less food purchased, you’re more likely to stick to your meal plans and waste less as well. Yes, you will make a second trip to the store – but instead of thinking of it as a chore, think of it as a fun, educational opportunity for the kids, or even an alternative date with your significant other. Your planet will thank you later.

Learn more about food waste and what Feeding America is doing about it. Then, take our quiz to see if you can spot food that should be wasted or tasted.

How to Save Your Fresh Food Before it Goes to Waste

Your guide to gleaning

Your guide to gleaning
Gleaning is a great way to reduce food waste and help food banks provide meals to people facing hunger. Learn how you can start gleaning in your area.