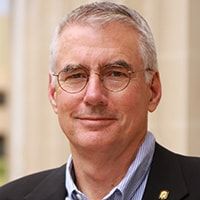 Scott Young retired as the Executive Director of the Food Bank of Lincoln on April 30, 2021.  In his former role, Scott managed the organization’s day-to-day workings, carrying out its mission, and heightening awareness of Southeast Nebraska’s growing poverty issue. Young had cast a wide net in finding the best career fit. Leaving Nebraska Wesleyan University in the early 70s to pursue work in radio, he held a variety of positions in stations in Lincoln and Omaha, Laramie, WY, and Casa Grande, AZ. In 1997 he was ready for a career change and re-enrolled at Wesleyan.

Returning to college as a non-traditional student allowed him to focus more on his studies, and he soon realized that nonprofit work might be a good fit for him. In 2001, he completed his Communication degree and became the Food Bank’s Executive Director.

Under Scott’s leadership, the organization increased its annual meal-connecting rate by twelve-fold.

While the hunger problem may not be as well defined in Nebraska, it is still present. During his tenure, Young reported that the latest Feeding America research reveals that there are nearly 18,000 children under the age of 18 in the Food Bank of Lincoln 16-county service area dealing with food insecurity.  It is work like this that Young said brings to light the poverty and hunger issues that Nebraska faces.

Scott is a well-respected leader both locally and nationally. Scott served on the National Council, the elected body that represents Feeding America member food banks, from 2009-11. In addition to his work in food banking, Scott has also done a significant amount of radio and other local media personality work.

Young lives in Lincoln with his wife JoAnne. They have three children, a daughter-in-law, a son-in-law, and five grandchildren.