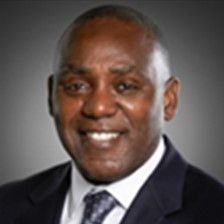 Kelvin L. Buncum is executive vice president of Neighborhood Markets for Walmart U.S. His responsibilities include overseeing all aspects of Neighborhood Market operations. Kelvin and his team are focused on creating a great experience that includes increased convenience for busy customers and high-quality fresh that delights the entire family.

Before joining Walmart, Kelvin held leadership positions with several companies and across multiple industries. Immediately prior to Walmart, he was President/CEO of International Medical Solutions, a start-up he launched with two partners. Kelvin’s professional experiences also include senior leadership roles at Pepsi Bottling Group, US Radio, and Joyner Communications.

In addition, Kelvin has worked for Digital Equipment Corporation, AT&T Bell Laboratories, and Northern Telecom. With these companies, he held leadership roles in the areas of product development, marketing, sales management, and applications planning.