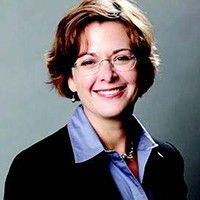 Kate Maehr has led the Greater Chicago Food Depository in its mission to provide food for hungry people while striving to end hunger in our community since 2006. In this role, she has guided a number of strategic initiatives and accomplishments to distribute nutritious food across Cook County while addressing the root causes of hunger.

Kate has been instrumental in developing new partnerships and programs to better serve priority populations, including children, older and adults and veterans. Among these innovative efforts are food pantries at two VA hospitals, the Illinois Commission to End Hunger and the Cook County Food Access Task Force. The food bank also recently launched partnerships with the City of Chicago and Chicago Public Schools to serve even more children and families through benefit outreach, school-based produce markets, summer and after-school programs. The Food Depository is also home to Chicago’s Community Kitchens, a workforce development program recognized by Feeding America in 2008 as the Community Kitchen Program of the Year.

Before becoming chief executive officer, Kate oversaw the Food Depository’s fundraising, public policy and communications initiatives. She is the past president of Feeding Illinois, the state’s coalition of food banks, and is a member of the Economic Club of Chicago and The Chicago Network. Kate was appointed Co-Chair of the Illinois Commission to End Hunger by Governor Quinn and served on transition teams for Mayor Emanuel and Governor Rauner. She currently serves on the Advisory Council for the State of Illinois’ Director of Human Services. Kate is a leading voice for anti-hunger policy at the national, state and local level and has testified before Congress, the Illinois General Assembly, the Cook County Board and Chicago City Council.

Kate holds a bachelor’s degree from Macalester College and a master’s degree in Public Policy and Administration from the University of Wisconsin. In 2015-16, she was also chair of Feeding America’s National Council.