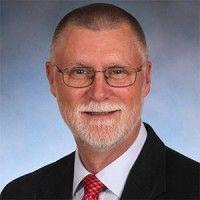 Bruce A. McPheron has served as a leader in higher education for more than two decades. His tenure as dean of the College of Agricultural Sciences at Penn State University and his role as vice president and dean of the College of Food, Agricultural, and Environmental Sciences at The Ohio State University provided deep insight into the complexities of the food system. For most of the past six years as executive vice president and provost at Ohio State, he worked to integrate an understanding of the importance of food security into the academics and operations of one of the world’s largest and most complex universities. He currently serves as Dean’s Chair of International Programs in Ohio State’s College of Food, Agricultural, and Environmental Sciences and will use that role to bring a global perspective to the topic of food security at Ohio State and beyond.

Bruce is a professor of entomology, having earned his BS degree from The Ohio State University and MS and PhD degrees from the University of Illinois at Urbana-Champaign. In addition to his on-campus leadership experience, he served as national chair of the Agricultural Experiment Station Directors, the Administrative Heads of Agriculture, and the Policy Board of Directors, all under the purview of the Association of Public and Land-Grant Universities (APLU). He was a member of the Board of Directors of LEAD21 and a Commission Member of the Food Systems Leadership Institute. Until his transition from the Ohio State provost role, he was a member of the executive committee of the Big Ten Academic Alliance and a member of the executive committee of APLU’s Council on Academic Affairs.

Bruce has taught extensively throughout his academic career, including courses in entomology, molecular biology, population genetics, international agriculture, and leadership. His current teaching assignment is an undergraduate honors course on public interpretation of scientific information, a timely issue. His research work has focused on the origin of insect species and on managing insect pests of global quarantine concern. His laboratory developed many of the early molecular diagnostic tools to track certain pests of fruits and vegetables. Among his honors, Bruce has been recognized with a Certificate of Merit by the US Department of Agriculture, by APLU for research leadership in agriculture, and by the Ohio Department of Higher Education for leadership in water quality efforts. He is an elected fellow of the American Association for the Advancement of Science and the Entomological Society of America.