Food Lion Serves Those Who Serve Our Country 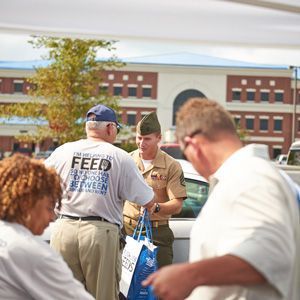 Each day, thousands of military men and women must take significant risks and sacrifices to defend the freedoms that Americans enjoy every day. At Food Lion, we are passionate about giving back to current and former members of the armed forces who have given our country so much.

According to Feeding America’s Hunger In America 2014 study, one in five households served by the Feeding America network of food banks have at least one family member who has served in the military. As a result, Food Lion made feeding our military a key priority when we launched Food Lion Feeds, our company's philanthropic feeding initiative, in 2014.

More than half of our 1,100 Food Lion stores are in close proximity to a military base. To make it easy for military families to access the food and groceries they need, Food Lion Feeds has hosted several food distributions at military bases and their surrounding areas, such as in Fayetteville and Jacksonville, N.C., Norfolk, Va. and Beaufort, S.C. With each donation provided at these sites, we have armed families with fresh produce and shelf stable items to enable them to cook nutritious meals and create quality time with their family members.

To further show our appreciation, each Veterans Day Food Lion offers active, retired and honorably discharged military personnel an affordable way to shop our stores with a 10 percent discount off of their overall grocery bill.

On this Veterans Day, we are also feeding military families of Food Lion's home state of North Carolina by donating to more than 2,000 families at Fort Bragg, Camp Lejeune and Seymour Johnson Air Force bases.

For these reasons, I love being a part of Food Lion and the Food Lion Feeds team. As a proud granddaughter of a World War II veteran, Food Lion Feeds’ mission to help feed those who are food insecure reminds me a little bit of how members of the armed forces also protect us from harm's way. The challenges we encounter pale in comparison to what our military faces around the world, but we both love our jobs and serve our country with pride!

We salute our veterans and hope they know they can count on Food Lion every day!

*Tara Robertson is the media and community relations manager for Food Lion.

3 facts you should know about military hunger

3 facts you should know about military hunger
We often don't think of active duty military members as needing a little extra help affording food sometimes. But the reality is, they do. We break down three reasons military members may face hunger, and what you can do to help.

From combat medic to soup kitchen chef
After spending 20 years as a combat medic, Mr. Grant knew he wanted to keep helping people. Now, he's feeding our neighbors facing hunger as the head chef in a Georgia soup kitchen. This is his story.