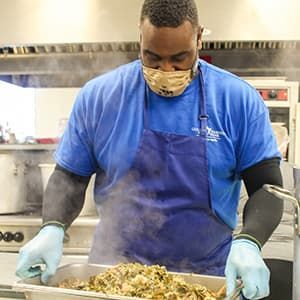 From a very young age, Mr. Grant knew helping people was important. It was part of his life – and his family’s legacy.

Mr. Grant comes from a long line of healthcare professionals. His mother and aunt were nurses. His grandmother was a caregiver. Growing up in South Carolina, his family always taught him that supporting his neighbors was important.

“I took a liking to helping folks out,” he said. “It’s in my nature and upbringing to be helping people as best I could.”

That’s why he became a combat medic in the Army.

“Becoming a medic was another way of helping people out. I had that nurturing nature, I guess,” he said.

Mr. Grant spent 20 years in the Army. For the majority of his career, he served infantry units overseas.

When he retired in 2017, he knew he wasn’t done helping people. So, he went back to school and found a different avenue to help his fellow neighbors: the kitchen.

Soon after graduating with his culinary degree, he was hired as the head chef at The Master’s Table, a soup kitchen in Augusta, Georgia.

“I try to put myself in other people’s shoes." he said. "If I needed the help, and someone was helping with no judgment, that’s what I’d want. And that’s what I do. I could’ve been one of those veterans coming into the kitchen. Instead, I’m making a meal for them."

A lot of meals. The soup kitchen offers a hot lunch seven days a week, serving about 300 people every day. As head Chef, Mr. Grant uses the food the soup kitchen receives from Golden Harvest Food Bank to craft a menu that fuels his neighbors.

Mr. Grant calls working at The Master’s Table the “coolest hard job” he’s ever had.

“It’s hard because you see the people in need, and sometimes we can’t provide all the things they ask for. But it’s so cool because you get to see what’re you’re doing for someone else, how it helps them, brightens their day. That means a lot to me. It also means a lot to me that we get to see that there are so many good people in the world daily. We get to see that every day. We get to be those good people daily. And if we have more people like that, the world would be a whole lot better.”

For him, it’s just another way of doing what his family has done for generations: helping people.

“If I see someone in need and I’m blessed to be able to help them in some way, that’s what I’m going to do. It’s just the right thing to do,” he said.

3 facts you should know about military hunger

3 facts you should know about military hunger
We often don't think of active duty military members as needing a little extra help affording food sometimes. But the reality is, they do. We break down three reasons military members may face hunger, and what you can do to help.

Fighting for Veterans
Twenty percent of households served by Feeding America include someone who has served or is currently serving in the U.S. military. Here are two of their stories.