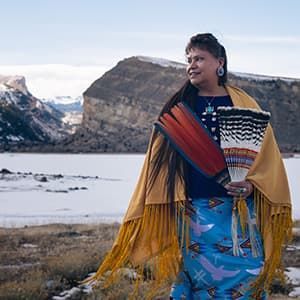 As we honor the resilience of Native American people during Native American Heritage Month, we thought it important to talk to one of the newer members of the Feeding America team, Mark Ford, Director of Native/Tribal Partnerships, to let people know what Feeding America is doing to foster food sovereignty and to right past wrongs. This Q&A session comes just as Ford hits his one-year anniversary with Feeding America. Here, he details the challenges of this work as well as its significance.

(This transcript has been edited for length).

Why is Feeding America, a food banking network, involved in Native American communities? And why did it create a full-time position to do so?

MF: First of all, Native American communities have some of the highest rates of food insecurity and hunger. Many of them are geographically remote and isolated and they have to drive long distances to go to a grocery store to get fresh produce and meats. Most of the food that's available are in small convenience stores or little gas stations which mostly have processed, high sugar, high sodium-content foods and soft drinks and... So it's difficult to find healthy, nutritious, fresh food in a rural isolated reservation.

So, it's important for Feeding America to serve that community in particular who have been historically experiencing food insecurity since colonization took place. So at least for 400 years, Native Americans have experienced some kind of food insecurity where previously there was an incredible commerce and food system that was in place and Native Americans were healthy and thriving but as this country was developed, that changed. Feeding America is about definitely putting people at the center and serving Native American communities as one of those group of people that need to be centered.

And I think the importance of having a full-time person to work on this is because working with native and tribal nations is complicated because they are sovereign governments. They're sovereign entities. It's like working with a government. They have the same rights and privileges as a state. They get to develop their own laws and policies. They have their own infrastructure around governance, administration, their own police, and fire departments and so forth. And so to understand how to work with native and tribal communities, to be culturally respectful and to keep in mind of that sovereignty is important.

It sounds like living in a food desert. Should we use the term food deserts when we talk about Native Americans?

So, we don't use food deserts because many of our native people live in geographical deserts. So, to me, desert makes it sound like a negative thing. Deserts are actually beautiful places if you've ever been to one. And there are actually foraging sessions that some native groups do in the desert. It's amazing how much food you can find in a desert. So, calling them food deserts is kind of an insult for people who live in the desert. I lived in Arizona for a number of years and it's a thriving area. So, what native people have been using is apartheid because it's more about a systemic issue. It's not about where you live, it's about the way that the food system has been organized and controlled. So, it's called a food apartheid. That's the term I've been using.

That's powerful. What's the significance of food to Native American culture? And how do you make those connections in your work?

First of all, animals and plants are our relatives and that includes any crops that are grown, anything that's foraged from the woodlands or the desert or the forest or the swamps; we’re related and connected to those foods. And anything that's hunted, any animal ─ fished or shrimped ─ or pulled out of the ground, those animals are our relatives. And there's a great respect and understanding that these other beings who share our world with us contribute to our well-being, to our nutrition, to our mental, physical and spiritual health. So, food are our relatives. And by understanding food is our relative, then there's a greater respect for the process of both harvesting, hunting, gathering this food, preparing this food, as well as eating the food. There's a sense of gratitude and also a connectedness that we are what we eat.

There's a Lakota medicine man who told me that when they hunt for buffalo, they are to hunt for the oldest Buffalo within the herd. And the reason is because that buffalo has had a long life, that there's a lot of wisdom, a lot of experience and knowledge that they've gained through their livelihood of many years. And by consuming that buffalo meat, we also absorb those experiences and that wisdom and that knowledge.

The Lakota have a wonderful tradition called Watecha, and Watecha means leftovers, but it's more than leftovers. So, whenever you prepare a meal in the Lakota tradition, you have a gathering, you bring people together, you prepare twice as much food than the people that you're expecting to show up. And the reason why is, everybody brings their Tupperware or their baggies and they bring home some of that food leftover. And it's not about having leftovers, it's about when you eat that food that's been left over from that event, you remember those relationships you developed, you remember the conversations you've had, you remember the experiences you had being together. To me, growing up as a Christian, it's very Eucharistic. It's what Jesus said to his disciples, "Every time you break this bread, do this in remembrance of me."

With its disproportionately higher rate food insecurity ─ Native Americans are said to struggle with food insecurity at a rate three times higher than that of white people ─ what can Feeding America and your work do to cut that rate by race and place?

Some of the work I've been doing with our network, with our food banks and our partner agencies is to identify what native people are looking for around food. Identifying who are the indigenous growers that we could purchase from, are there local indigenous farmers and ranchers and food producers that we could purchase those foods and then distribute them to the communities? And even if they're not indigenous, are there local farmers who have produce ─ if it’s meaningful for those people. Native people have accepted food sometimes from our food banks that is not healthy, the bottom of the barrel. And there are a few food banks who've actually apologized to tribal communities saying, "In the past when we started, we weren't sending you healthy foods." And to see that is a wonderful step.

We're also finding it's very expensive to source indigenous fresh produce and foods. And sometimes you can't find the capacity or the amount that you need, that they can't grow enough. So, we're looking at investing in some of these food producers to build their capacity, to grow more so we could purchase more and provide more of these foods to indigenous communities. And it's a wonderful way of showing equity by investing in these communities. It's helping them thrive financially by doing that and supporting the local economy. And it's giving people choice of what they would like to receive. So, all those are important, as well as the partnership that's developing between the food banks and the native and tribal communities.