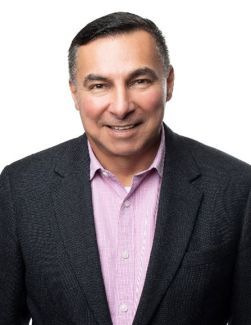 Mark is a native of Alamosa, Colorado, and is of Chiricahua Apache Tewa/Tiwa (Pueblo) and Spanish descent.  Mark was a Roman Catholic priest for 16 years, where he served seven years as a pastor on the Navajo and Hopi Reservations in Arizona.  Mark was later assigned to two churches in New Orleans, Louisiana, where he co-founded a ministry for children with disabilities and their families.

After Hurricane Katrina, Louisiana Governor Kathleen Blanco appointed Mark as Assistant Director of Disability Affairs in 2006 to assist persons with disabilities in accessing resources and services after the hurricane.  In 2008, he was then appointed by Governor Bobby Jindal as the Executive Director of the Governor’s Office of Indian Affairs, assisting the Louisiana tribes after Hurricanes Gustav and Ike in their recovery efforts.

Mark lives in Portage, Indiana, and is currently the Director of Native/Tribal Partnerships at Feeding America officed within the Communications and Community Engagement Department, where he assists Feeding America’s network members to develop or enhance relationships with Native and tribal communities, champion initiatives that address hunger and food insecurity, promote Native American Food Sovereignty and support local leaders to advocate on behalf of their communities.