Empty Plates, Empty Stomachs – food banks across the country are raising awareness about hunger in their communities. 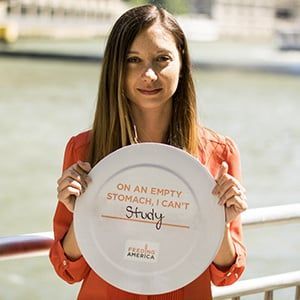 Hunger Action Month™, which takes place each September, is a time when people all over America stand with the Feeding America nationwide network of food banks to fight hunger. Alongside all 200 Feeding America network food banks, we commemorate Hunger Action Month by spreading the word about hunger in our communities, volunteering, advocating, donating and helping raise awareness about hunger.

Check out some of the unique ways that food banks are honoring the fight across the country.

Second Harvest Food Bank of Santa Cruz County created a Hunger Action Hero named Hope for Hunger Action Month. Through their superhero, Hope, they are reminding their community that you don’t need superpowers to be someone’s hero.

To see more, check out the food bank’s photo album on Facebook. 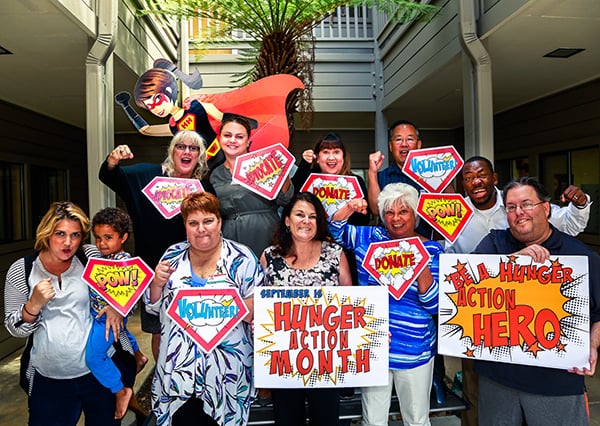 Lighting up our cities

Buildings all over the country are being lit up orange in support of Hunger Action Month!

Second Harvest Heartland food bank, in Maplewood, Minnesota, coordinated for 10 landmarks across the Twin Cities to be lit up orange to raise awareness for hunger.

And in Chicago, the Merchandise Mart lit up orange to commemorate Hunger Action Day.

Hurricane Irma didn’t stop the Feeding South Florida food bank from telling people about hunger within their community. All month long the local community has been working extremely hard to help those struggling with hunger in Florida. To get into the Hunger Action Month spirit, they hosted a pep rally at Miami Arts Studio joined by the Miami Marlins!

Representing hunger in our own front yard

The Foodlink food bank installed 156 orange plates on its front lawn, each representing 1,000 people who live within their community who face hunger. There are 156 plates for the 156,000 people in their region who often don’t know when or where they will get their next meal.

Watch a time-lapse video of this being made.

It’s easy for you to participate in Hunger Action Month! Tell us how you will fight to end hunger — then share with your friends and family.