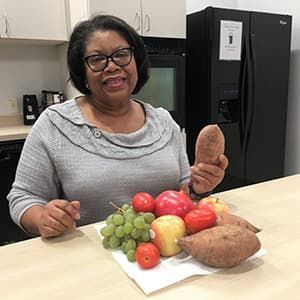 Hunger affects all of our neighbors, but in Black communities, the rate of food insecurity is more than three times that of white individuals. In 2020, 1 in 4 of Black individuals faced hunger. Discriminatory policies and practices have led Black people to be more likely to live in poverty, more likely to face unemployment, and have fewer financial resources like savings or property than their white counterparts.

In response, Black community leaders have worked hard to help their neighbors facing hunger. These leaders have and continue to play vital roles in the Feeding America network of food banks and in their communities. We’re going to introduce you to just a few stories of the incredible work being done by Black leaders ending hunger.

Meet Earline, who dedicated over 30 years to helping feed her community

Few people can say they have dedicated over three decades to serving their community- but Earline is one of them. As she retires in early 2022, she marks 32 years working at the Food Bank of Central and Eastern North Carolina.

In 1990, Earline saw an ad in her local newspaper for a position with the Food Bank of Central and Eastern North Carolina. Soon, she was helping to organize donations and fundraisers.

As the Food Bank began to evolve, Earline grew right alongside it — at one point moving into a volunteer management role and finally landing with the Food Bank’s team that works with their partners in the community.

Under Earline’s leadership as the Vice President of Partner Services & Public Policy, her team expanded the capacity of the Food Bank’s partner agencies. They launched programs aimed at feeding vulnerable populations — children and seniors — advocated for strong federal and state nutrition programs and helped partner agencies expand their capacity to nourish more people.

While her leadership role certainly keeps her busy, Earline is always one of the first to jump up and help bring in a food drive or volunteer at a food distribution. Thanks to her work, thousands of people in her area have had meals on their tables.

While she will be greatly missed, her long-term dedication to ending hunger is an inspiration to many.

Meet Drew, who started helping others during his time of need 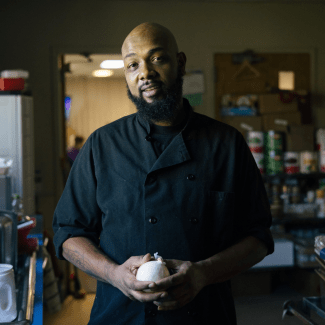 “I always wanted to cook,” he admits. “I had eleven uncles and they were always cooking with my father. I was around it a lot.” So, he decided not to pursue healthcare. Instead, Drew enrolled in a community college culinary program and got a job at one of Detroit’s casinos as a chef.

But not long after, the pandemic began, and Drew lost his job. Without a steady income, taking care of his 10-year-old daughter and 9-year-old son was a challenge. But one day, walking through the Brightmoor neighborhood in Detroit, he came across the City Covenant Church, and soon found out about their meal program. “I’d know I could come here to get a meal,” he said. “It took some of the stress off.”

But Drew did not want to just take food home. He knew he could use his skills to help out. So, he started volunteering at the church to cook meals. “It takes a lot of trust to eat someone’s food that you don’t know,” he said. “It’s an honor to be able to help our community. Food is nourishing and I really appreciate the opportunity to give back.”

Now, Drew is working at a nearby restaurant, but he still volunteers at the pantry. And even though he cooks at work and as a volunteer, he still can’t get enough. “I love cooking,” he says.

Meet Sharima, who knows the importance of giving back 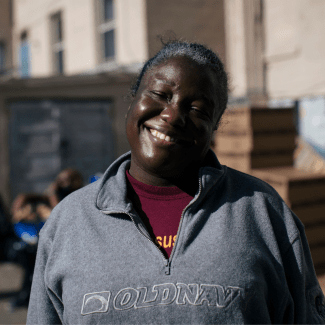 When Sharima Weekes, a single mother of two, first started volunteering at Ephesus food pantry five years ago, she did not expect to one day need its services.

She had a job, but money was still tight. “There came a time that I started classes, kids got into the teenage zone, appetites were high. My groceries, bills and everything, it just wasn’t adding up,” she said. Sharima turned to the pantry where she volunteered for help, “I don’t see how I would have completely made it on my own.”

Today, Sharima works full-time as a dialysis technician, but she arranged her days off so she could still volunteer on distribution days at Ephesus, which works with Feed More, a member of the Feeding America network.

Sharima encourages her children to help with distributions, too. “I always want them to know the importance of giving because you never know when the table’s going to turn,” she said. “People think because you work you don’t need the help.”

Ephesus helped her when she needed it and she continues to give back. “They have done so much for me. I can never pay them back.”