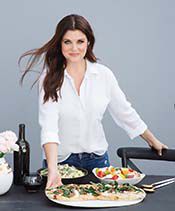 “My home is always open for people to pull up a chair and gather around the table for delicious food and warm hospitality. I love being a part of a community that finds it just as important to share the same thoughts with people around the world. No one should go hungry and everyone should feel the love and comfort of sharing food with friends and family.”

Tiffani Thiessen made her return to the small screen, starring as ‘Lori Mendoza’ in the NETFLIX original sitcom ALEXA & KATIE now in Season 2. Simultaneously, she recently wrapped production on her first cookbook “Pull up a Chair” making its debut October 2nd.

For three seasons, Tiffani hosted DINNER AT TIFFANI’S on Food Network. It is now one of the most watched shows on the network.

Thiessen is an American television and film actress. A versatile performer, she has proven her talent from comedy to drama in a variety of film and television roles. From Woody Allen's comedy “Hollywood Ending,” to “Beverly Hills 90210,” Thiessen's charisma has kept her career moving constantly forward and has gained her the adoration of millions internationally.

Thiessen starred as Elizabeth Burke in the USA Network original series WHITE COLLAR. She has been seen in “What About Brian” and in a nine-episode guest-starring role on NBC's “Good Morning Miami.” In 2003, she starred the Fox series “Fast Lane” with Peter Facinelli and Bill Bellamy, directed by McG. She also guest-starred on the NBC hit comedy “Just Shoot Me” in a three-episode arc, portraying a columnist who becomes romantically involved with David Spade's character, and appeared in a recurring role on the ABC comedy “Two Guys and a Girl.”

She began modeling at the age of eight and soon went on to star in the television series “Saved By the Bell” for five seasons. At the same time, she made her feature film debut in “Son In Law” opposite Pauly Shore. In 1993, she showed her range when Aaron Spelling cast her in “Beverly Hills 90210,” where she portrayed the multi-layered Valerie Malone for five seasons.

Her other feature film roles include the comedy “Ladies Man;” the independent film “Speedway Junky” with Jesse Bradford, Jonathan Taylor Thomas, and Daryl Hannah; “Love Stinks” with Tyra Banks and French Stewart; and the horror/comedy spoof “Shriek! If you Know What I did Last Friday 13th” opposite Tom Arnold.

In 2005, Thiessen started up her own Production company called Tit 4 Tat Productions while directing her first short film entitled “Just Pray” the same year. “Just Pray” went on to win awards at top film festivals around the country.

Thiessen has also successfully participated in campaigns for brands such as: GLAD, Hershey’s, Quaker, TRIA Beauty, QVC Beauty with Benefits, Albertson’s and many more.

Tiffani is based in Los Angeles with her husband, daughter, and son.