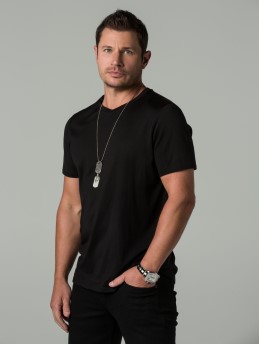 “An astounding 50 million Americans are not sure where their next meal will come from. Having the opportunity to help many struggling families through Feeding America is something I’ve found to be very rewarding. I hope I can inspire others to lend a helping hand to continue the fight against hunger."

Known for his charming personality and diverse range of projects, NICK LACHEY is not only a multi-hyphenate musician, actor, and producer, but also one of the hottest television hosts in town. Nick rose to fame as the lead singer of the multi-Platinum boy band 98 Degrees, selling more than 10 million records. He also has released four solo albums.

These days, Nick is best known for co-hosting Love is Blind and The Ultimatum with his wife Vanessa Lachey, both of which are massive hits for Netflix. Nick’s long hosting career also includes NBC’s The Sing Off and VH1’s Big Morning Buzz Live, and he can also be seen judging on FOX’s Alter Ego. In 2021, Nick won the fifth season of The Masked Singer as “The Piglet,” showing that he’s still got it!

In addition to Nick’s television and music endeavors, he has also served as a brand ambassador on a number of prominent brand deals, including McCormick’s “Grill Mates” campaign, Subway’s “Ugly Veggies” campaign, and the Lay’s “Do Us a Flavor” campaign, to name a few.

Nick also remains a constant advocate for children’s and humanitarian causes through his work with organizations including Autism Speaks, Feeding America, Make-a-Wish Foundation, The Boys & Girls Club, Big Brothers Big Sisters, Juvenile Diabetes Research Foundation (JDRF), VH-1 Save The Music, The Cincinnati Children’s Hospital and The Cincinnati School for Performing Arts. He is also founder and President of The Nick Lachey Foundation, a 501(c)3 non-profit organization dedicated to helping children, families, and communities in need throughout the United States.

Nick was raised in Cincinnati, Ohio and attended the School for Creative and Performing Arts (SCPA), University of Southern California, and Miami University. Nick currently resides in Honolulu, Hawaii with his wife and three children. To stay up to date with Nick, follow him on Instagram and Twitter @Nicklachey.