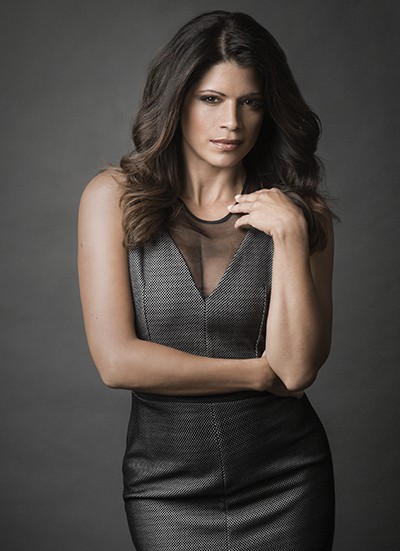 “As a kid growing up in the Bronx, I remember my mother's tears and dilemma over whether to buy milk or the 25 cent icy that I asked for. I also remember the shame she experienced. Whatever the circumstances, no one should go hungry. That's why Feeding America is important to me."

Actress Andrea Navedo currently stars on the CW’s Golden Globe nominated television series JANE THE VIRGIN. Currently in its third season, Navedo portrays Jane’s loving and outgoing mother, for which she has received critical acclaim. In 2015, she accepted the Imagen Award for Best Supporting TV Actress, as well as the Elizabeth Pena Breakthrough Artist Award at the HOLA Awards. Navedo was recently cast to play Captain Perez in Netflix’s upcoming cop thriller feature BRIGHT. From 2010-2011, Navedo co-starred in the HBO television series HOW TO MAKE IT IN AMERICA opposite Luis Guzman. She has also appeared in several roles across the LAW & ORDER franchise. Her film credits include SUPERFAST, ONCE UPON A TIME IN QUEENS, alongside Paul Sorvino, and the romantic drama REMEMBER ME, opposite Robert Pattinson. Navedo dedicates her time to various charities close to her heart including A Place Called Home and The Fresh Air Fund and supports organizations such as The Geena Davis Institute, ASPCA, the Humane Society and Feeding America. A Bronx native, Navedo divides her time between New York and Los Angeles, where she lives with her husband and two kids. In her spare time, she loves taking salsa lessons, enjoys hiking and studies Jiu-jitsu.