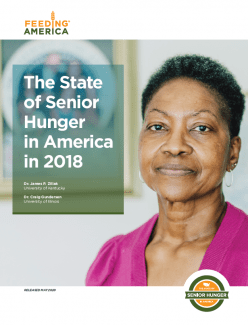 Our research on food insecurity among seniors aims to identify the prevalence of senior hunger and to understand seniors' unique needs, characteristics, and risk factors. The research studies highlighted on this page are used to inform our programs and efforts to eliminate senior hunger.

The State of Senior Hunger in America

The State of Senior Hunger in America annual report series documents the prevalence of food insecurity among the senior population age 60 and older in the United States. It identifies the geographic variation in food insecurity among seniors, providing data for all 50 states and the District of Columbia.

The 2020 release also includes Hunger Among Adults Age 50-59 in 2018. Findings reveal that in 2018, an estimated 10.6% of older adults age 50-59 are food insecure. At the state level, rates range from 2.6% in Colorado to 17.3% in Kentucky, and at the metropolitan area level, rates range from 4.6% in the Denver-Aurora area (CO) to 17.4% in the Hartford (CT) and Memphis (TN) areas. With the senior population expected to grow in the decades to come, this analysis reveals the challenges faced today by millions of aging adults and provides insight into the future challenges that may be faced by the next generation of seniors.

This research was conducted by Dr. Craig Gundersen and Dr. James Ziliak using data from the Current Population Survey.

The 2018 release of The State of Senior Hunger (based on data from 2016) include the following reports:

The 2017 release of The State of Senior Hunger (based on data from 2015) include the following reports:

Spotlight on Senior Health: Adverse Health Outcomes of Food Insecure Older Americans used data from the NHANES survey to document the health and nutrition implications of food insecurity among seniors aged 60 and older.

Little Kids Make a Big Impact
Children can make a big difference in their communities this summer by volunteering at their local Feeding America food bank.

More Seniors Facing Hunger Today Than Before the Great Recession

Food and Hope for Older Americans

Food and Hope for Older Americans
This past year has been a tough one for Sonny. With no income, he had to sell his belongings, including his stove and other appliances, just to put food on his table.
Share
Tweet