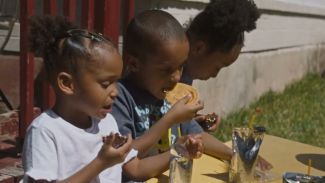 “Ok, are y’all ready?”
Robert Font is driving his six grandchildren to school, everyone snug in their minivan.
“Yes!” A chorus of kids responds.
“Ok. Where’s Nana?” Robert asks.
“She’s in our heart,” the troop responds.
“Who loves you?” He says.
“Everyone!” They chime.
“And what kind of day are we going to have today?” he asks.
“We’re going to have a great day!” they cheer.


The morning ritual was something that Robert’s wife used to do with the kids on their way to school. And since she passed away two years ago, Robert makes sure to keep the tradition going.

“Those kids are what I live for,” he said. “Not having their parents in their lives, I know that’s hard. So, I try to fulfill that for them.”

After raising children of his own, Robert wasn’t expecting to take on another round of parenting duties in his fifties. But that’s what happened. He and his wife, Kimberly, ended up assuming care for the six kids, ages four through 11. But when Kimberly passed away suddenly, Robert was left to take care of all the children on his own.
“(Kimberly) was my rock. She was the glue that kept this family together. And if I could describe her in one word, I’d say she was a miracle,” Robert said.
After his wife’s passing, Robert could’ve shut down, given up. But his grandchildren inspired him, gave him purpose.

“I had to wake up the next day and say, ‘who’s going to take care of these kids?’ And I knew. But I wouldn’t change it for the world.”
And so, hours before the morning ritual on the way to school, Robert wakes up, gets ready, and then gets all the kids ready to go. Then he heads to work and is home in time to pick everyone up. That’s the routine during the school year.

During the summer, things are a bit different, especially when it comes to food. Since the kids aren’t eating breakfast and lunch at school, Robert needs a little help feeding his grandkids. So, the family receives free summer meals near their home.

“If I didn’t have those summer meals, it would be difficult, but we could get it done,” he said. “But the meals help because I never have to worry about them eating, because I know they’ll have some food.”

Whether it’s summer or winter, Robert is dedicating every day to his grandchildren. “When my wife looks down from heaven, I believe she’s looking at a man who is striving to do the right thing by these kids,” he said. “Just knowing that she’s there, that’s a great thing. That keeps me motivated.”