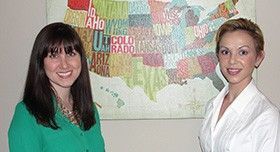 Brittany Hodak is no stranger to great ideas. With accolades including Advertising Age’s 40 Under 40 list, Inc.’s 35 Under 35 list, and Billboard’s 30 Under 30 list, she’s had many creative breakthroughs, including her innovative concept for the marketing company, ZinePak, first presented on the TV show Shark Tank. But for people struggling with hunger, many would say her best idea was yet to come.

While filming Shark Tank, when notified that she was the recipient of “per diems”—a daily allowance for expenses—the seed was planted. A few weeks later in conversation with her cousin and future business partner and Co-Founder Jennifer Barker, the idea blossomed into the non-profit Per Diems Against Poverty. The plan was simple: reallocate donated per diems from individuals and corporations to help people in need, specifically, Americans struggling with food insecurity. One hundred percent of per diems are donated to Feeding America.

“As early as I can remember,” says Jennifer, “my parents emphasized the importance of serving others, especially those who are suffering in poverty. I knew when Brittany approached me on Thanksgiving Day in 2014 that launching Per Diems Against Poverty was the cause I had been searching for. While we did not come from a food-insecure family, many of the children with whom we attended school experienced hunger daily. Hunger in America is a huge yet very solvable problem.”

Since the company’s launch in 2015, this concept of kindness has struck a chord with multiple entertainers, executives and athletes, most notably major league baseball player Curtis Granderson. Granderson, a world-class athlete from humble beginnings, remembers his early days when money was tight. Now he donates his per diem funds to help provide food to the one in seven Americans who struggle with hunger. His recent $10,000 donation generated 110,000 meals for people in need.

Per Diems Against Poverty has a goal for 2016: provide 10 million meals for Americans struggling with hunger. Brittany and Jennifer have done the math. Their target will be reached when only 100 professional baseball players pledge their per diems for the 2016 season.

Jennifer adds, “The fact that 1 in 7 million Americans continues to struggle with food insecurity is unacceptable. Millions of dollars in contractual per diems are paid annually to Americans, many of whom do not depend upon these funds for food. We are inspired by the difference these donated per diems have already made in the lives of thousands of Americans through Feeding America's network of food banks and are proud to partner with their organization. They share our core values and determination to see a day when no American goes hungry, and thanks to them, we were able to hit the ground running and make a positive impact from day one, rather than having to build out our own infrastructure. We are confident that our programs can be part of the solution to ending hunger in America.”

Feeding America is a proud partner of Per Diems Against Poverty and we applaud their innovative approach to fighting hunger. In turn, we thank the individuals who donate to the cause. For the 48 million Americans who struggle with hunger, your generosity becomes fresh vegetables for an older American, a nutritious breakfast to help a child concentrate in school and a bag of groceries for a family in need. All bright ideas that bring hope for a better tomorrow.