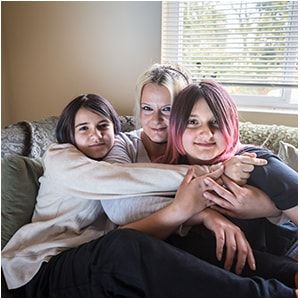 Through my time at Feeding America, I’ve interviewed hundreds of mothers struggling to provide for their children during difficult times. It’s been humbling to see mothers always putting their children first. They skip meals, forgo medical care and work multiple jobs to make sure their kids have all they need. Anja is one of these mothers. Her story exemplifies a mother’s sacrifice and courage in the face of adversity, and reminds us that it’s important to support mothers like Anja across the country. There are so many who are struggling in silence, but they don’t need to be. Together, we can help mothers like Anja and her children reach a brighter future.

The last 12 months for Anja have been more than challenging. After gathering the courage for years, she left her ex-husband who was abusive to her and her daughters. “In addition to courage, it was hard to gather the resources I needed to leave,” Anja said. “I was finally able to do it, though, with the help of a local women’s shelter that took all three of us in and helped us find a place of our own.”

Anja and her two daughters – Solina, 13, and Zoe, 11 – have been living in their current apartment for a short while. “We’re so grateful to be on our own,” Anja said, “but it’s also been very difficult. I haven’t been able to find work yet, even though I’m trying. As a result, I barely have any income coming in. When we first moved, I was scared that I might not be able to feed my family. Then, my friend told me about a local food pantry, and it’s been one of the best things that’s ever happened to me.”

Once a month, Anja goes to the food pantry to get meats, fresh vegetables, pasta, sauces – everything her family needs. “They are just amazing there,” Anja said. “I know this situation has been rough, and so many times I’ve felt helpless to make it better. When we were suffering from abuse, food was withheld from us and we often didn’t get enough. I didn’t want my children to feel like that again, even if it was for different reasons.”

Because of the food pantry, Anja knows that her children will come home from school, open the fridge and find food there. They will be able to eat when they are hungry – a necessity that was once a luxury for them. “During meals,” Anja said, “they smile and laugh, and I know that food is now something that brings comfort instead of fear.”

Anja, Zoe and Solina are survivors. Anja is extremely proud of her daughters for everything they’ve been able to overcome, and she’s confident in their future. “Solina wants to be a NICU nurse when she grows up,” Anja said, “and Zoe is passionate about being an animator. I know they will get there, because they are smart and talented and motivated. After getting through what we have, they can do anything.”

Anja says the food pantry and other support she’s received have helped build this confidence and give her girls and herself a brighter future. “The food pantry has been healing for us,” Anja said. “It’s helped us put the past behind us and focus instead on moving forward with our dreams.”

To hear more about mothers who have found support in the Feeding America network food banks and agencies, watch the stories of Priscilla and Staci.