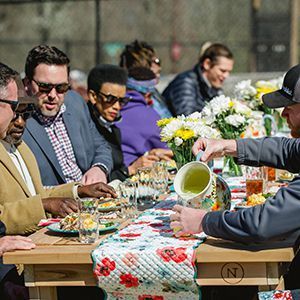 On March 22, the CEO of Second Harvest Food Bank of Metrolina, a city council member, police officer, chef, and other community leaders gathered around a homemade wooden picnic table in a community garden to share a meal. For many, this was their first time meeting one another. Surrounded by plots growing fresh fruits and veggies, they sat side-by-side and discussed the community they love and issues it is facing, specifically hunger. The table they gathered around is now a permanent fixture in the community and so are the new relationships.

The community garden is in Druid Hills, a small neighborhood outside of Charlotte, North Carolina. Druid Hills was built in the 1950’s and was one of the main communities many servicemen moved to after the war. The community was historically made up of people with moderate income, but it continues to change as residents grow older and new families move to the neighborhood. Nadine Ford’s family was one of the original families to the area. Nadine recognized how Druid Hills was changing and the need to bring the community together, so the parks and recreation department helped her apply for a grant to create a community garden.

“We gave life to that side of the neighborhood in the best way we knew how. We grew food,” said Nadine.

As a health inspector for 17 years, Nadine would often see people going without meals or only having one meal each day. This left her with a passion for getting healthy food to people in need.

“We grew food in spite of the heat, the fire-ant infested soil, the inability to properly hydrate the soil, the ever-present weeds,” Nadine continued, “And at the end of the day, we gave the food away to people..and not just folks living in [Druid Hills], but folks across the County.”

Nadine’s hope is that the garden will become even more of a community space since it was selected as a recipient of a Neighbor’s Table as a part of Walmart’s Fight Hunger. Spark Change. campaign. The table was placed near the community garden, “So when people sat down to commune, hopefully, they will look at the garden and continue to see life,” said Nadine.

After the table was placed and the community leaders met, there was a block party with games, a food truck and a DJ.

This is the first of several community gatherings made possible by collaboration between Nextdoor, Walmart and Neighbor’s Table. In the weeks ahead, Nextdoor is traveling across the country with Walmart for Fight Hunger. Spark Change. to help call attention to the fact that our communities are the front line in the fight to end hunger.

Get a peek into Nadine’s community discussion.

Over the past five years, Fight Hunger. Spark Change. has raised critical awareness of the issue of hunger in America and has donated more than $50 million to fight hunger in communities across the country.