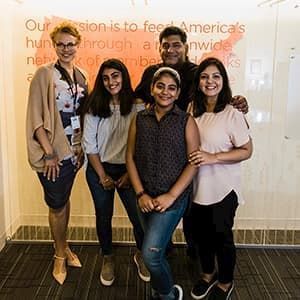 It was always 11-year-old Alizay Kashif’s dream to have a successful lemonade stand.

So, in late June, she and her 16-year-old sister Emaan decided to set one up outside their home in Naperville, a suburb of Chicago. And, the sisters planned to donate the money they made to Feeding America, because they knew there were a lot of children in Illinois who struggle with hunger. In fact, almost 17 percent of kids in Illinois don’t know where their next meal is coming from.

“The most important thing that we have to fight and give our all for is hunger,” Alizay said. “That’s why I wanted to help.”

It didn’t go exactly as they planned.

Since Alizay and Emaan live on a quiet street, business was slow and a couple hours after they set up, they’d only earned $9. Then, a group of teenagers came by and stole the money.

“I was in shock, it was really stressful,” Alizay said.

But the sisters were undeterred. The community got wind of their situation, and soon a kind stranger offered the front of his house – on a busy road – to host the lemonade stand. The sisters took him up on their offer and saw a huge difference.

After hearing their story, neighbors from all over came out to donate.

“I didn’t think there would be this much support,” Emaan said. “If it weren’t for the community, we wouldn’t have raised as much money.”

But it wasn’t just neighbors who came out to support the sisters’ lemonade stand. The Naperville Police Department also showed up with a convoy of police cruisers, and a donation of $170 from the local station.

“I was like, ‘wow!’ I knew the police were going to be coming to the lemonade stand that day, but I didn’t know how many. It was incredible,” Alizay said.

All told, the lemonade stand raised nearly $350. And on Friday, July 19, Alizay, Emaan and their parents brought the money personally to Feeding America’s national office in downtown Chicago.

Feeding America staff met them with a hero's welcome.

“Feeding America helps a lot of people, because hunger is such a huge issue,” Emaan said. “There are kids in our community, our school who might be hungry. We want to help people in our local community, which is really important.”

“I can only imagine being hungry,” Alizay said. “Getting to help hungry people is an honor and a blessing.”

Alizay and Emaan knew that every effort makes a difference – every cup of lemonade, every cookie sold, helps fight hunger in the United States. Join Alizay, Emaan and Feeding America by making a donation today.