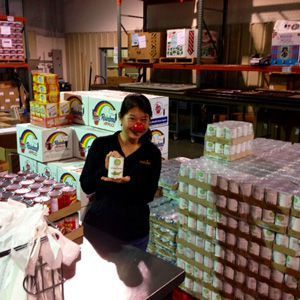 Before I moved to Sioux Falls to start my Child Hunger Corps term, all my knowledge of Sioux Falls came from Google… And a quick Google search for “Sioux Falls” returns articles having to do with its low unemployment rate (2.4 percent!), strong local economy, and overall high quality of living. Thus, I was shocked to see from my community needs assessment that in parts of the city, as many as 1 in 4 people are living below the poverty line. When looking at the entire state, three of the 10 most impoverished counties in the U.S. are located in South Dakota.

From my community needs assessment, I also found that among BackPack Program participants, approximately three out of four shared BackPack food with at least one other family member. Some BackPacks were being shared by as many as 12 people. For this reason, I made the recommendation that Feeding South Dakota pilot school food pantries to better serve the needs of children, especially adolescents, and their families.

At first, I was unsure whether a pilot school food pantry would be possible. Fortunately, Feeding South Dakota received a generous grant from the Red Nose Day fund for child hunger programs, including school pantries. Because of Red Nose Day, we were able to make our first delivery to our pilot school pantry a few weeks ago.

Red Nose Day began as an initiative in the UK. Comedians and other celebrities would come together to bring awareness and raise money for the issue of children’s poverty—both domestic and international. In 2015, the first Red Nose Day event in the U.S took place. In May 2015, NBC hosted a star-studded television event that attracted 3.2 million viewers. Leading up to the event, Walgreens stores sold red, foam noses, with the proceeds going towards the fight against child poverty. This year, Red Nose Day will take place on May 26, and Walgreens will again be selling red noses and other “flair” as fundraisers.

Thanks to Red Nose Day’s commitment to improving the lives of children in need, my recommendation of starting the school pantry program became a reality. It has only been three weeks since we made our first school pantry delivery, and the feedback has already been astounding. Students and parents both were excited about the variety of products as well as having enough food for the entire family.

**Red Nose Day is returning for its second annual event on May 26, inviting the American public to come together to have fun and make a difference for kids who need help the most. The day’s events will culminate in a star-studded TV event, The Red Nose Day Special, broadcast live from Los Angeles 9:00 – 11:00 p.m. ET, only on NBC.  Feeding America is one the nonprofit organizations that will benefit from the national campaign.