Putting Pride Aside: One Father’s Story 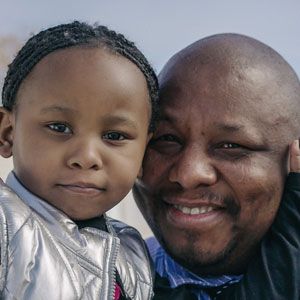 For Lamont, his most important role was being a father who could provide for his family. He worked hard to give his children a life he never had – a comfortable one, where they had everything they needed and more. He worked day in and day out to make this possible. But one day, he got hurt at work, and it all fell apart.

While working for a cable company, a coaxial cable struck Lamont’s eye. He was supposed to be out for just a short while, but as it turned out, the cable ruined his vision and left him unfit for the job. All he had to rely on was his workers’ compensation, and that wasn’t enough to feed his family.

“Things got really bad for us,” Lamont said. “I had promised myself I’d never be in a position where I couldn’t provide for my family, but one day, my kids were hungry, and I had nothing to give them. That was the lowest moment for me.”

Lamont didn’t want to visit a pantry. He had never wanted to ask for a hand out. “My wife reminded me, however, that this was beyond my pride,” Lamont said. “This was about feeding my children, and I needed to sacrifice my pride so that they had enough.”

Lamont decided to visit his local pantry, and it changed his life.

“I was scared walking through that door for the first time. I thought I’d be judged – but really, I was just judging myself,” Lamont said. “Everyone was so kind. They shook my hand, hugged me, and helped me see that this didn’t mean I was a failure as a father, as a man. It just meant that I needed help to get back to where I was before.”

Lamont began volunteering at his local pantry – served by Utah Food Bank, as he looked for work. The pantry saw something special in him and offered him a job. “Eventually, I was promoted to a director and now I’m in charge of a program that works with families to break the cycle of poverty,” Lamont said. “I can provide for my family again, and not only that, I’m truly fulfilled. I know I’m making a big difference in people’s lives.”