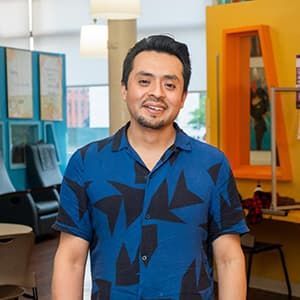 Cain Leon Montalvo loves to cook traditional Latin and Caribbean dishes for the young people who visit the kitchen and food pantry at the Streetwork Project in Harlem.

“When people are familiar with the food, they feel comfortable,” he said. The warm meals remind them of their families. The dishes make them feel at home when they might otherwise feel lost and alone.

Cain knows how they feel. When he moved to New York City as a young, undocumented immigrant, he struggled to find jobs that paid a living wage. Sometimes he would skip meals. At one point, he sold a gold ring so that he could buy something to eat.

Though he has a degree in Business Administration, he could only find work in restaurants. He was often mistreated and underpaid. At times, he was harassed for being gay. Without a work visa, he felt he had few options to change his circumstances.

Cain knows his story is not unusual. “All of these difficulties are experienced by the people we serve,” he said.

About 101,000 young people do not have stable housing in New York City, and 44% of them identify as lesbian, gay, bisexual, transgender or queer.

“Many of them are in the process of accepting their sexuality and discovering it,” Cain said. “Within their family, some are accepted but the vast majority are not. That is why they seek refuge in our shelters and centers.”

Streetwork Project, which is part of Safe Horizon and the Food Bank for New York City, seeks to meet the needs of homeless youth. This includes help with medical care, legal services, housing and benefits assistance as well as sexual health services and daily necessities like showers, clean clothing and meals.

As the Food and Nutrition Services Coordinator, Cain makes breakfast and lunch for the community. He holds a monthly cooking class for participants. He manages the food pantry and distributes groceries, including fresh produce, to people every week. And he interprets for Spanish speakers, which helps them feel cared for and connected.

Cain, who has been able to establish permanent residency status in the United States, thinks of the Streetwork Project as his second home. He wants the community to feel the same way.

“We do not judge them. We only provide them with support where they need it,” he said.