Life over resilience: A Navajo woman drives change in Arizona 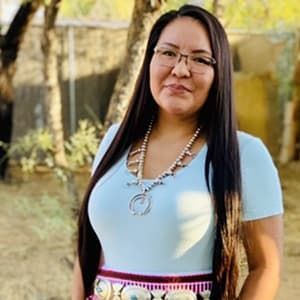 “What disproportionately impacts our community is hunger,” Caitlin Riggs said. The Community Food Bank of Southern Arizona “is where I want to be and where I feel I can make the most change and help people.”

Growing up on the Navajo Nation reservation in Chinle, Arizona, Caitlin never experienced hunger, but she saw how inequality hurt her community.

She often thinks of how the United States military forcibly removed her great-great-great-grandmother from her homeland of Canyon De Chelly during the 1860s in what was known as the Long Walk.

“She went on the Long Walk, and she survived. We had land taken from us, and we survived,” Caitlin said.

She hates to use the word “resilient” to describe the Diné, also known as the Navajo, because “after a while, you don’t want to be resilient anymore. You just want to live.”

Still, “after generations and generations of succeeding and living life and beating the odds, it’s like this resilience has been built into us,” she said.

Caitlin has overcome a lot in her 31 years. She and her father both suffered from alcoholism.

After her father died from the disease in 2016, she “got sober and got into recovery. My life really took a 180 and it wasn’t really about me anymore. It was about how I can help other people.”

Caitlin left her job at an accounting firm to work for the Community Food Bank of Southern Arizona as their Financial Grants Manager and more recently as their Senior Accountant.

She joined the food bank because she wants to be a part of solving hunger, she said. “Can we get to the causes and conditions of this? What is happening in our community that people have to come here for food?”

She’s proud of the diverse array of programing that the food bank offers, including school pantries, gardening and health initiatives, and partnerships with agencies that offer Black, Indigenous and People of Color (BIPOC) scholarships. They’ve also recently been awarded two grants to address hunger in southern Arizona’s Native American communities.

She’s helped the Community Food Bank of Southern Arizona implement its own EDI efforts, including an acknowledgement that the food bank exists “on the ancestral and occupied lands of the Tohono O’odham, Pascua Yaqui, and many more who may call this place home.”

In many ways, her work feels like a homecoming.

“We always share food. That’s how we all come together. It’s community. It’s love. It’s family,” she said.

Caitlin can still remember the smell of the tortillas and mutton that her Nali – her paternal grandmother – would make during family visits in rural Arizona.

“The second we would walk in, my Nali would start cooking,” Caitlin said.

When family gets together, “we share food. We laugh,” Caitlin said. “You can’t even get a word in because everyone’s talking at the same time.”

She wants to create this kind of welcoming and supportive space for people that might not feel comfortable accessing help.

“Having that kind of an environment at the food bank is a way of dismantling a barrier that we have with some of our BIPOC communities,” she said.

“We can identify where the disparities are and then provide the resource to get to equity and eventually justice,” she said.