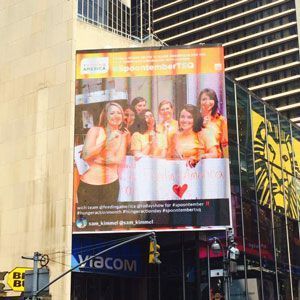 The Feeding America nationwide network of food banks successfully kicked off our annual Hunger Action Month campaign on Sept. 1. Hunger Action Month is our month-long effort to engage the nation in the fight to end hunger. It’s the opportunity to join a movement that has a real and lasting impact on our effort to feed more Americans than ever before.

New this year, Feeding America has made a spoon the main icon of the campaign. A spoon has an inherent link to food; it’s how we feed ourselves and feed our children. It symbolizes not always having food, and the millions of American’s who face this issue. From social activations to print ads, the spoon is our means to educate the public on the issue of hunger and get everyone involved this “Spoontember™.”

It has been a very exciting first week of Hunger Action Month, with many notable highlights to share!

Join us! Take your spoon selfie today and challenge a friend to do the same! Don’t forget to tag @FeedingAmerica, and use #Spoontember & #HungerActionMonth. More details here.

On Hunger Action Day® (Thursday, September 3rd), representatives from the Feeding America National Office and our strategic and creative partners at the Advertising Council and 360i had a street team in Times Square in New York City, handing out individually-wrapped orange spoons to passersby, with hunger statistics and information on how to take a spoon selfie to raise awareness this Hunger Action Month. Once shared via social media with a special hashtag, photos were displayed on a billboard in Times Square, which was generously donated for the activation by Viacom. Check out the photos here!

Many exciting local activations took place during week 1 of HAM, including local celebrities taking spoon selfies, buildings and monuments turning orange, exciting partnerships with local business, and more. Get a sneak peek at some of the action below:

Be sure to join us this month in raising awareness of the 1 in 6 people struggling with hunger in America. Visit HungerActionMonth.org to get involved today!

*Lisa Gervasio is the senior marketing specialist at Feeding America.