Giving back with peanut butter 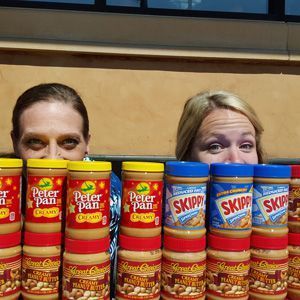 *Today is national Peanut Butter Lover’s Day. In honor the of day, we wanted to recognize our generous donor The Cheesecake Factory, who hosts a peanut butter drive for us each year.

The Cheesecake Factory inherited a tradition of excellence that began in 1972 with our founders, Oscar and Evelyn Overton. Their service-mindedness, insistence on always “doing the right thing,” and deep-seated values shaped our culture and continue to define the character of our company today, nearly 45 years later.

Continuing the legacy of our founders and deeply inspired by Feeding America’s commitment to end hunger in the United States, The Cheesecake Factory began working with Feeding America nearly eight years ago. Since then we have contributed more than $3.5 million to Feeding America from our $0.25 donation per slice of featured cheesecake.

Every year we are humbled by the generosity of our staff members, but perhaps most impressive is not the sheer number of pounds that were collected, but the fact that we do not solicit donations from our guests. Instead, our staff members generously use their own hard earned money to purchase the peanut butter, and in many instances they rely on their creativity to raise funds.

At The Cheesecake Factory in Tucson, bartenders Mary and Rebekah made coin purses to sell to fellow staff members, with all proceeds going to the Peanut Butter Drive. These enterprising women initially made 10 of the brightly colored, well designed custom purses – but they were such a huge hit that they ended up making 40. They sold each purse for $15, raising $600 for the drive.

At The Cheesecake Factory in Durham, our staff members had a contest and the team that collected the most peanut butter won a three-course meal prepared and served by the restaurant’s general manager and executive kitchen manager. On the last night of the contest, server Alejandro donated $800 of his own money to make his team the winner.

These are just a couple of examples of the creativity and generosity that our staff members show every year during our annual Peanut Butter Drive. Our team looks forward to this annual fundraising event, and our Charitable Foundation helps fuel their excitement by sponsoring a photo contest with prizes for peanut butter-based photos in categories such as “Best Peanut Butter Bar,” “Funniest,” and “Cutest.”  Each winning team received $1,000 to donate to their local food bank.

The Peanut Butter Drive photos we receive every year further illustrate our staff’s creativity and passion for doing the right thing. We think the Overtons would be proud.