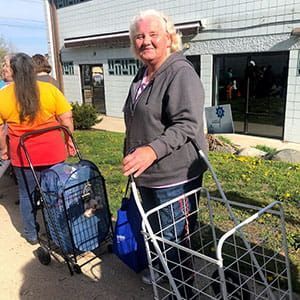 In much of North Central Indiana, farmland stretches as far as the eye can see.

During the summer, seas of gold-tipped corn sway in the breeze. With all that agriculture, produce must be inexpensive and easy to access for everyone, regardless of income, right?

“Produce is expensive here,” said Kier Crites, the chief operating officer at Food Finders Food Bank, a Feeding America network member based in Lafayette, Indiana. “For lower-income families in our community, it’s not really an option.”

But the food bank is changing that narrative.

“We’ve really made it a priority to get produce out to those who need it,” Crites says.

Since 2010 the food bank’s Mobile Pantry program has been delivering fresh produce and other nutritious food almost every day throughout Food Finders’ 16-county service area. And they’re not slowing down any time soon. In fact, over the past two years the food bank has increased produce distribution by 125 percent.

And thanks to a little help from Walmart and Sam’s Club’s “Fight Hunger. Spark Change.” campaign, Food Finders is further expanding access to produce in Indiana while telling the story of the clients it serves.

Thanks to Walmart, the food bank is providing eight extra produce distributions throughout its service area over the next month and collecting stories from people served by the food bank at each. The first drop served nearly 170 individuals. All told, the food bank hopes to serve more than 3,000 people at the eight added distributions.

And those fresh fruits and vegetables are already making a tremendous difference to hungry individuals and families in North Central Indiana. Just ask Rita Leming (pictured above), who teared up when asked how the produce was helping her.

“I’m just thankful,” she said. “The extra produce is good for me because I can’t afford to buy it at the store.”

“Sometimes this food means it’s the only meal of my day,” said Carol Masterson, while waiting in line at the first Food Finders produce drop. “It’s awesome. I appreciate it wholeheartedly.”

For people like Pam Fredericks, the extra produce means she can do something simple she otherwise wouldn’t be able to do – make soup in a crock pot.

“Without Food Finders I couldn’t make it financially,” she said. “So, I really appreciate this.”

To learn more about how Walmart, Sam’s Clubs, their customers and suppliers are helping food banks like Food Finders fight hunger, visit Walmart.com/fighthunger.