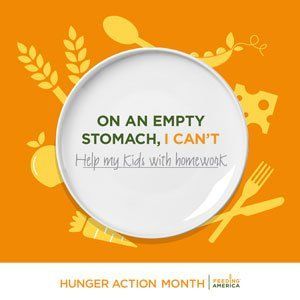 We are very grateful for the enthusiasm and ingenuity of our corporate partners that raised awareness about hunger and inspired employees and the nation to get involved. Here are some examples of how our partners supported Hunger Action Month:

CHEEKY HOME
Cheeky joined the conversation on what it means to run on an empty stomach via social media and events. They created custom HAM plates to support all of Feeding America’s paper plate activations at live events. They also provided a unique coupon to all food bank members for significantly discounted orange paper goods to use at local food bank HAM celebrations and activities.

C&S WHOLESALE GROCERS
Throughout the month of September, C&S Wholesale Grocers supported Hunger Action Month by hosting an organization-wide food drive and shared messages about food insecurity on branded plates throughout its headquarters.

LAND O’LAKES
During September, Land O’Lakes contributed to Feeding America’s Hunger Blog and, in honor of Hunger Action Month, donated loads of 40,000 pounds of freshly made, low-fat, whole-grain macaroni and cheese to food banks within the Feeding America network.

PUBLIX
Publix committed $5 million to the Feeding America network this past September in honor of Hunger Action Month. It turned its corporate headquarters in Lakeland, Florida, orange by installing orange spheres in its corporate pond; each larger sphere representing a food bank in its service area and each small sphere representing an agency supported. In-store support included orange signs at the registers and check-out workers bringing awareness to Hunger Action Month. Social media support was also provided.

UNITED
During the month of September, United helped raise awareness of hunger and Hunger Action Month on all of its flights through its 2016 Eat for Good snackbox campaign. For every snackbox sold, United donated $1 throughout the entire month, up to $100,000. The campaign was promoted on United.com, in its Hemispheres magazine, and through in-flight announcements.

Together, we are making great strides toward ending hunger. We will continue to explore innovative approaches so we can have a truly lasting impact on the 46 million individuals the Feeding America network serves each year. On their behalf, we thank our partners for their support during Hunger Action Month and throughout the year.

*Nancy Curby is the interim senior vice president of development at Feeding America.