Fighting Child Hunger One Voice at a Time 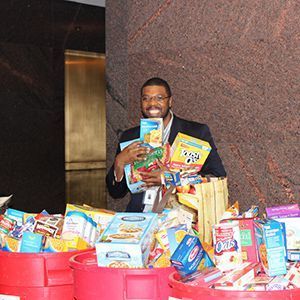 I am a child of the 80s whose mom played Barry Manilow’s albums throughout my formative years. So, what does this have to do with Volunteer Month? Rajan Taylor, a security contractor at the ConAgra Foods’ St. Louis office, makes me want to break out into song. Specifically, Manilow’s One Voice, which he also performed at the 2010 Nobel Peace Prize Concert. It’s inspired by the idea that if one person stands up for what he believes in, the rest will follow.

Rajan read about ConAgra Foods’ long-standing commitment to take action against child hunger and that generated an idea. He’ll humbly tell you he simply called a few friends and sent an email, but he ultimately sparked the largest, single-day, citywide food drive in history to benefit the St. Louis Area Foodbank – a member of the Feeding America network. He called the event, held on March 20, 2015, “Spring into Giving,” which is an appropriate phrase to describe his actions to engage more than 75 St. Louis companies to raise more than 50,000 lbs. of food, or rather more than 40,000 meals in one day.

Rajan embodies ConAgra Foods’ spirit of taking and catalyzing action to eradicate child hunger, a big problem. Nearly 16 million children in the U.S. struggle to get enough to eat, and this can hold them back from the opportunities they deserve -- education, hope and a thriving future. Hunger will not be solved by one organization alone; we value our partnership with Feeding America, friends and even competitors, but we need more people like Rajan to join in, spark change and give hope to our neighbors. (For even more inspiration see youth Making a Mark on Hunger.)

In April, we celebrate National Volunteer Month and work to fight hunger through ConAgra Foods’ Child Hunger Ends Here campaign. Rajan is one of many champions in the company, across office locations and facilities, who are inspired to engage in the annual, coordinated hunger-service event. During last year’s month of service, employee efforts lead to packing more than 1 million meals and contributing more than 7,000 hunger-service hours in more than 25 U.S. cities in a single month.

This year we will do it again – only on an even larger scale. Beginning April 1, ConAgra Foods officially launches its fifth-annual, coordinated hunger-service event. Throughout the month, employees will pack meals, organize fundraising events and may even apply skills, like project management, to enhance efficiencies at food banks and pantries. This year, our goal is to reach 10,000 hunger-service hours by volunteering in our respective communities.

Rajan is doing his part. He tells us he is excited that ConAgra Foods will be known throughout St. Louis as a company that acts on its belief to end hunger; and we tip our hats to Rajan. To borrow from Barry, “We need just one voice facing the unknown, and then that one voice would never be alone.” Thanks, Rajan, for being the One Voice and inspiring the rest of us to join you. 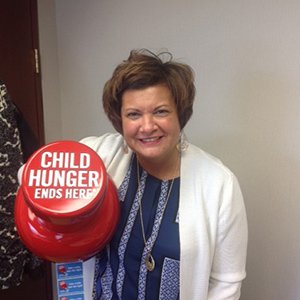 *Kori Reed is vice president, Cause and Foundation, at ConAgra Foods.
We have enough food to feed everyone that is hungry. Will you help us get it to them? Learn how you can get involved.