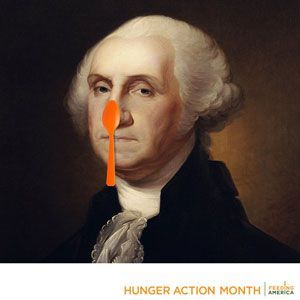 Each September, Feeding America and its nationwide network of food banks join together for Hunger Action Month to raise awareness of the 48 million Americans who are struggling with hunger. It is a time to engage the public in the fight against domestic hunger and spur them to take action to help their neighbors in need. Hunger is a complex issue and it will take all of us working together – charities, individuals, government and businesses – to solve it.

CHEEKY HOME
Cheeky offers a brand-new line of tableware, and with every purchase of a specially-marked Cheeky item from Target, Cheeky will donate one meal to Feeding America. Cheeky also provided orange spoons to Feeding America network food banks to use in Spoontember activations as well as sponsoring the use of the hashtag #Spoontember throughout the month.

UNITED
During the month of September, United helped raise awareness of hunger and Hunger Action Month on all of its flights through its 2015 Eat for Good snackbox campaign. For every snackbox sold, United donated $1 throughout the entire month – up to $150,000. The campaign was promoted on United.com, in its Hemispheres magazine and through inflight announcements. Additionally United employees volunteered at several Feeding America member food banks in United’s hub cities.

C&S WHOLESALE GROCERS
Throughout the month of September, C&S Wholesale Grocers supported Hunger Action Month by hosting a Food for Kids employee-wide food drive and switched out its white cutlery with orange ones in the cafeteria at its headquarters.

BANK OF AMERICA
For the 4th consecutive year, our friends at Bank of America will help provide even more impact to our neighbors in need this season as it once again serves as the exclusive holiday Give A Meal partner. Launching during Hunger Action Month, Bank of America will contribute its amazing 2:1 donation match. The campaign runs through the end of December.

TLC
In September TLC kicked off the “Give A Little TLC” campaign to support organizations that embody its brand essence and support an attitude of inclusion and open-mindedness. TLC is letting viewers know that giving a little can go a long way, whether it's through volunteering, donations, love or support.

By the end of 2015, TLC is committed to donating one million meals to Feeding America. For Hunger Action Month, TLC released a “Watch and Share” video that featured TLC talent and raised $55k for Feeding America. It also sponsored the “Give A Little TLC” Sweepstakes which gave fans the chance to volunteer for hunger relief alongside TLC personalities. Buddy “The Cake Boss” Valastro spoke about Feeding America live on air during his season premiere.

DDBRCF/DUNKIN’ BRANDS
The Dunkin' Donuts & Baskin-Robbins Community Foundation organized its annual Back Pack Stuffing event with The Greater Boston Food Bank. More than 100 Dunkin' Brands Inc. employees gathered to fill as many packs of nutritious food as possible. It also shared information about the SNAP program (formerly known as Food Stamps) through its employee communications and encouraged participation to better understand hunger and how it impacts all aspects of a family's health.

AMERIPRISE
Ameriprise Financial supported Hunger Action Month alongside Second Harvest Heartland at the Minneapolis Institute of Art, with a selfie booth encouraging attendees to take a spoon selfie to help fight hunger. Ameriprise also kicked off its challenge grant during Hunger Action Month, which runs through the Thanksgiving holiday.

LAND O’LAKES
Land O’Lakes continues to support Feeding America’s Hunger Action Month by recently donating 40,000 lbs. of Macaroni and Cheese to the Food Bank of Iowa as part of the First Run Program, which began in 2010 to provide more product to food banks across the United States. Since the program started, Land O’Lakes has donated more than 3 million pounds of fresh product.

THE GREAT AMERICAN MILK DRIVE supported Hunger Action Month with activation in over 30 national and regional retailers.  In its second year, The Great American Milk Drive has provided over 400,000 gallons of milk to Feeding America member food banks and raised critical awareness of the issue of hunger.

Hunger exists in every community in our country. By working together with our corporate partners, Feeding America will educate the American public about the incredible need that exists nationwide and engage them in the fight against hunger so that all families have access to the food they need to thrive.  We are grateful for our partners’ support during Hunger Action Month and throughout the year.