Beloved Hall of Fame baseball star Cal Ripken Jr. spent 21 seasons in Major League Baseball playing for the Baltimore Orioles, including a record-setting 2,632 consecutive games. After his retirement in 2001, Cal and his family founded the Cal Ripken Sr. Foundation in memory of his late father. Over the last 19 years, the foundation has served 1.5 million children in-need each year, providing safe places for them to learn and play.

In early April 2020, only a month after the first case of COVID-19 appeared in the United States, the Cal Ripken, Sr. Foundation announced it would shift some of its focus to battle food insecurity caused by the COVID-19 pandemic. In partnership with Feeding America, the Foundation launched a new initiative: Strike Out Hunger. “Our foundation just said ‘OK, we’re not going to sit around and just wait until all of this is over,’” Cal Ripken, Jr. told Brian Kilmeade, host of Fox & Friends. “Let’s shift our focus temporarily – let’s focus on the immediate problem and let’s put our infrastructure to work," Ripken said. The initiative links the Foundation’s longtime focus of underserved kids and families with a goal to provide food to families in need during these unprecedented times. In a show of dedication, the Ripken family along with other partners contributed $200,000 to kickstart the campaign.

To promote the initiative, Cal Ripken, Jr. also personally joined Twitter and Facebook and appeared on a variety of TV programs including the Tamron Hall Show, ESPN, Fox Sports, and NBC Sports. He also appeared in USA Today, the Chicago Tribune, and The Washington Times.

The efforts have paid off. To date, Strike Out Hunger has raised over $260,000. In addition to Feeding America, funds were also dedicated to Maryland Food Bank and Houston Food Bank where the Foundation has a strong presence. The donations from this wonderful initiative will have an enormous impact across the country, enabling 2.6 million meals to be provided to neighbors in need.

During these challenging times, Strike Out Hunger has been crucial to Feeding America, its 200 local food banks, and 60,000 food pantries. Today, there is no greater issue than meeting the needs of individuals struggling with hunger. During his extraordinary career in baseball, Ripken was known as "Iron Man" because of his grit, determination, and record of consecutive games played. When it comes to helping underserved kids and families with food, safety, and opportunity, Ripken and his family show the same strength and resolve. Indeed, Ripken and his family foundation have made a real difference in the fight against hunger across the country.

Feeding America is grateful to Mr. Rikpen, his family and the Cal Ripken, Sr. Foundation for their care for neighbors in need and for providing a way for everyone to get involved in hunger relief. Truly, as Mr. Ripken said in his inaugural tweet, “To make a real difference, it takes a team.” 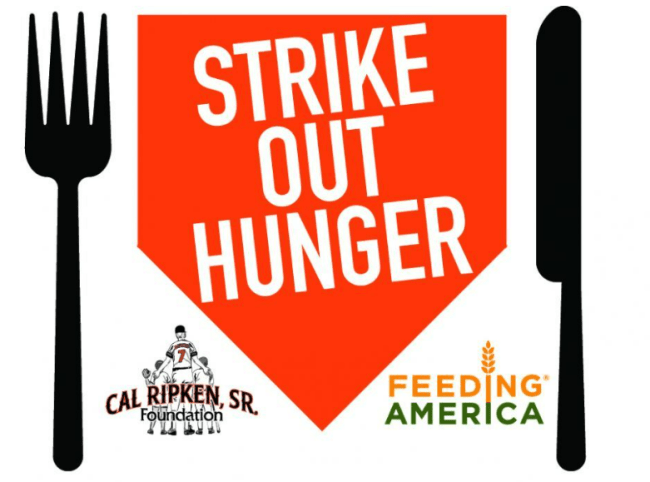