When it comes to child hunger in the Las Vegas area, Dr. Frank Stile wants to be part of the solution. So far, this has included starting the Frank L. Stile Foundation to serve the special needs of children and families in crisis, and speaking about local hunger wherever he can. He’s even hosted a carnival — complete with jugglers and clowns — to celebrate donation milestones.

There is a lot to celebrate. In 2017, The Frank L. Stile Foundation exceeded their goal of 750,000 meals and donated 1 million meals to people facing hunger. Since its inception in 2011, the Foundation has donated the financial equivalent of 3 million meals to the Feeding America network.

Now an accomplished cosmetic plastic surgeon, Dr. Stile remembers his early childhood. As the first generation of immigrant parents, his family was of modest means but always had a seat at the table for someone in need. “Neighborhood kids would ask my mother for food, which she gladly shared,” said Dr. Stile. Once he asked his mother why kids came to her for food. To which his mother replied, “Not everyone is as fortunate as us.”

The Value of Volunteering

Decades later during the Great Recession, rising levels of food insecurity in his Las Vegas community spurred Dr. Stile to take action. “I could not ignore the statistics and what I saw,” he said, “The recession affected children. I could not believe the scope of the problem. It just didn’t make sense.” He turned to Three Square, the local Feeding America food bank in Las Vegas, learned more about domestic hunger and got involved.

Dr. Stile and his team volunteer twice a month at the food bank and at other organizations that help families and children. Sometimes they pack lunches for kids, other days are spent packing meals for the elderly or meal boxes for families living in shelters. “We do the deal,” he said. With busy schedules, the team has to make a concerted effort to volunteer. Nonetheless, Dr. Stile said, “we are happy we gave our time to help others.”

Providing Financial Support to the Fight Against Hunger

Inspired by best-selling author, entrepreneur and philanthropist Tony Robbins’ personal story of childhood hunger, and have learned even more about local hunger through his volunteer experiences, Dr. Stile set a goal to raise funds as well.

Commenting on reaching the 2 million meal donation goal, he said, “We’ve done something that is worthwhile. I have performed operations to help transform people but nothing has felt like this. Our team knows at the end of the year we make a difference. It makes you feel different about yourself and the world.”

In addressing the importance of both local and national efforts to fight hunger Dr. Stile said, “It is easy to get jaded and feel that donations go into a black hole. But when you go to the food bank, with an army of people and pallets stacked up high, you touch, feel and smell where the funds go. You feel you are directly impacting local hunger.” He continued, “Nationally when you partner with an organization like Feeding America with food banks around the country, there is a large reach.”

As Feeding America works to eradicate child hunger, we asked Dr. Stile’s opinion on what is needed most. “Education, education, education,” he replied. “The problem of domestic hunger cuts across every line. It is so pervasive yet virtually unknown by most people in our country. This is a big deal.”

In the United States, 13 million children — 1 in 6 — face hunger. On their behalf, we thank Dr. Stile, his team and the Frank L. Stile Foundation for their ongoing efforts to raise awareness of child hunger and provide meals to children and families in need. 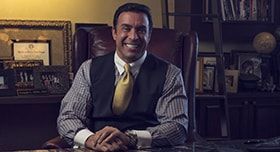