David Askew works two jobs, loves painting and helps the men and women who live on skid row in downtown Los Angeles. To understand the wonder of his achievements, David explains, one must look at his past: David spent 11 years homeless, suffering from addiction, living on those very streets on skid row.

Hitting bottom and owning only a lighter, David made his way to the Midnight Mission, an organization that assists people experiencing homelessness and moves them to self-sufficiency by providing services, counseling, education and training. That day was a turning point for David, and the Mission became his home for nearly three years.

Now a Midnight Mission alumni and five years in recovery, David remembers the challenges of the streets — especially the daily battle with hunger. “It was tough out there,” says David, “you do what you have to do.” And for David that meant visiting food programs at local churches, panhandling and at times even stealing food or eating discarded meals. 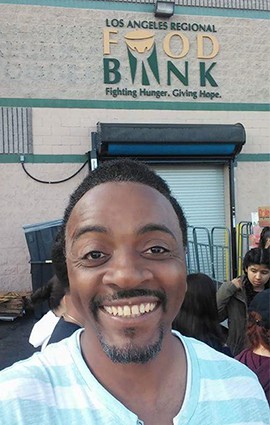 Those memories come to the forefront when he sees the people currently walking where he walked, living where he lived. And they propel him to give back by reaching out a helping hand or providing a word of encouragement, ever striving to do more.

David finds inspiration in the hunger-relief efforts of Feeding America and fellow compassionate supporters who help to end hunger in their own communities.

For David, the days of hunger have been replaced with the hope that he can inspire others. “My personal life has made me what I am today.” His advice? “Never give up on yourself, no matter how hard it may seem. Keep pushing forward.”

David’s story was profiled in a short documentary titled The Unseen by Feeding America supporter and hunger advocate Liv Rosenbloom. His art work is available here.