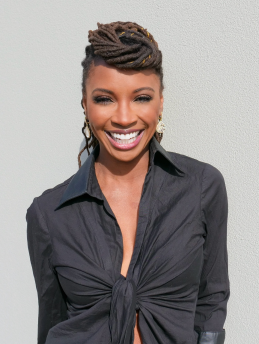 "I cannot describe the feeling of pulling up and seeing a line wrapped around the block waiting for the necessity of food.  To be able to work with an organization that fulfills that necessity is a true gift and very humbling."

Shanola Hampton will star in the recently green-lit NBC series FOUND. She also serves as a producer. In any given year, more than 600,000 people are reported missing in the U.S. More than half of that number are people of color whose missing status seems to go neglected. In the series, Hampton plays “Gabi Mosley,” a public relations specialist who once counted herself among the forgotten missing. Now, along with her crisis management team, she is dedicated to finding those overlooked souls. However, unbeknownst to anyone, this everyday hero is hiding a chilling secret of her own in this drama from executive producer/writer Nkechi Okoro Carroll (“All American,” “All American: Homecoming”) and Berlanti Productions.

For 11 seasons Shanola starred alongside William H. Macy in Showtime’s iconic, award-winning series “Shameless.” She portrayed the Gallaghers’ sassy neighbor, Veronica “V” Ball. In addition to acting on the series, Shanola also directed one of the highest-rated episodes in the final season.

Shanola’s film roles include the feature Grace, with Kristin Davis and Dermot Mulroney; Through the Glass Darkly, with Robyn Lively and the TV ONE romantic comedy Three’s Complicated co-starring Tyler Lepley, which she also co-produced.

Hampton has previously guest starred and recurred on a wide variety of television shows, including “The Neighborhood,” “Criminal Minds,” “Stalker,” “Related,” “Scrubs,” “Strong Medicine” and “Reba.”

Originally from South Carolina, Hampton earned her undergraduate degree from Winthrop University before receiving her Masters Degree in Fine Arts from The University of Illinois. She currently resides in Los Angeles, California with her husband and their two children.