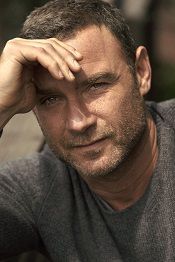 “There is no reason anyone should have to go hungry in this country. Feeding America has been an invaluable resource to so many people struggling to feed themselves and their families. The time my sons and I have been able to spend working with them has been truly invaluable to us."

Heralded as “the finest American theater actor of his generation” by the New York Times, Liev Schreiber’s repertoire of resonant, humanistic and oftentimes gritty portrayals have garnered him praise in film, theatre, and television.

Schreiber stars as the title role of Ray Donovan in Showtime’s critically-acclaimed hit series alongside Jon Voight. This powerful family drama centers on Ray as L.A.’s best professional fixer – the go-to guy in Hollywood who deftly solves the complicated, controversial and confidential problems of the city’s elite. Schreiber’s riveting performance as ‘Ray’ garnered him five Golden Globe Award nominations in the category of ‘Best Actor in a Television Series Drama’ and three Primetime Emmy nominations in “Outstanding Lead Actor in a Drama Series.” He also directed the first episode of season four. The show will begin shooting its sixth season in April.

Most recently, Schreiber voiced the character ‘Spots’, in Wes Anderson’s stop-motion-animated film Isle of Dogs. Last year, he was seen in IFC’s Chuck which he also co-produced and co-wrote. The biopic tells the story of Chuck Wepner, the liquor store salesman and heavyweight boxer who was given the opportunity to fight Muhammad Ali as an underdog and was the inspiration for the film, Rocky. The film also stars Naomi Watts, Ron Perlman, and Elisabeth Moss.

In 2015, Schreiber was seen in Spotlight, an award-winning film about the true story of when The Boston Globe uncovered the scandal of child molestation within the Catholic Church. Schreiber played Marty Baron, the editor-in-chief of The Boston Globe who assigned the journalists to the task. The film won several awards including an Oscar for Best Picture, a Golden Globe for Best Motion Picture – Drama, and an Independent Spirit Award for Best Picture. It was also listed on the American Film Institute’s Top Ten Films of 2015.

His portrayal of Orson Welles in Benjamin Ross' RKO 281 brought Schreiber Emmy® and Golden Globe® Award nominations. His other telefilm credits include George C. Wolfe's Lackawanna Blues and John Erman's The Sunshine Boys, opposite Woody Allen and Peter Falk. As one of the documentary medium's foremost narrators, he has lent his voice to such works as Mantle, :03 from Gold; A City on Fire: The Story of the ‘68 Detroit Tigers; Nova; and Nature.

In 2010, Schreiber received his third Tony® nomination for his role in Arthur Miller’s A View from the Bridge alongside Scarlett Johansson. His performance as Ricky Roma in the 2005 Broadway revival of David Mamet's Glengarry Glen Ross, directed by Joe Mantello, earned him his first Tony Award. He was again a Tony nominee for his portrayal of Barry Champlain in the 2007 Broadway revival of Eric Bogosian's Talk Radio, directed by Robert Falls.  Other stage work includes in Les Liaisons Dangereuses in the lead role opposite Janet McTeer, the Public Theater's Shakespeare in the Park production of Macbeth, in the lead role opposite Jennifer Ehle, directed by Moisés Kaufman; Othello; Hamlet; Henry V; and Cymbeline.

In 2005, Schreiber made his feature directorial debut with Everything is Illuminated, which he also adapted from Jonathan Safran Foer's best-selling novel of the same name. The film, starring Elijah Wood and Eugene Hutz, was named one of the year's 10 Best by the National Board of Review.